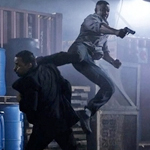 Career-wise, MJW has diversified more than his golden age predecessors like Jean-Claude Van Damme and Steven Seagal (who he fought in UNIVERSAL SOLDIER: THE RETURN and EXIT WOUNDS, respectively). He’s supplemented his many action credits with Tyler Perry movies and sitcoms (WHY DID I GET MARRIED 1-TOO, For Better or Worse) and with creating and writing BLACK DYNAMITE (both the movie and the animated series, soon in its second season). But one look at his cartoonishly inflated muscles or at one of his flying kicks and it’s clear that he was meant for an endless series of action vehicles, even if that’s not what Hollywood (or Sofia, or whoever) thinks they’re supposed to be making in this era. END_OF_DOCUMENT_TOKEN_TO_BE_REPLACED