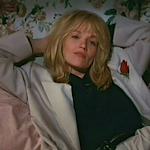 Steve Brooks (Perry King, CLASS OF 1984, MANDINGO) is “one hell of an advertising man,” which of course means he’s introduced in his office putting golf balls into that thing that business assholes putt into in all ‘80s and ‘90s movies. Then he gets an an unexpected call. Three of his ex-girlfriends, Margo (JoBeth Williams, POLTERGEIST), Liz (Lysette Anthony, KRULL, Bryan Adams videos) and Felicia (Victoria Mahoney, Brewster Place) invite him over for “a surprise party.” END_OF_DOCUMENT_TOKEN_TO_BE_REPLACED