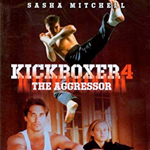 KICKBOXER 4: THE AGGRESSOR (1994) brings back part 2 director Albert Pyun (CYBORG) and opens with a 4-minute clip show as David recaps the events of parts 1-3 in a letter from prison. Much more time seems to have passed in the story than the two years between direct-to-video releases. Since we last saw David Sloan he apparently fell in love, got married, opened a martial arts school, worked for the DEA “trying to bring a major dealer to the U.S. for trial,” but got busted for killing the guy. “It was him or me. Tong Po saw to that,” he explains, if that counts as explaining. (Other times he says Tong Po framed him.) END_OF_DOCUMENT_TOKEN_TO_BE_REPLACED