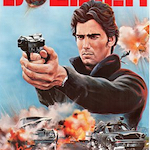 Ken Wahl (THE DIRTY DOZEN: THE NEXT MISSION, THE GLADIATOR) plays the titular The Soldier. That’s his code name! Seems like there could be some misunderstandings there. He leads an elite counterterrorism unit that operates completely off the books and answers only to the head of the CIA (Ron Harper, BODY COUNT, PEARL HARBOR). And they’re introduced in a pretty funny way. In the first shot, a limo carrying an ambassador is driving through Philadelphia and an old lady – well, a woman wearing an old lady costume – crosses in front of her with a babycart. The driver doesn’t even slow down, just nails the woman and keeps going. A woman with a shopping bag, a construction worker and a businessman all see it happen and come running over, to find the lady dead. Inside the babycart is a doll and an uzi. END_OF_DOCUMENT_TOKEN_TO_BE_REPLACED