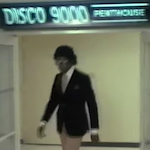 Fass Black is the name of said big shot, played with distinct swagger by John Poole, whose only other role was as “Record Executive” in the Philip Michael Thomas movie DEATH DRUG (1978). He also has story and wardrobe credits on this. And wardrobe credit is big because that’s about half of the character. One notable thing about this movie is that he wears white-framed sunglasses more often than he doesn’t. It went long enough without showing his eyes at the beginning that I was convinced it was gonna be a DREDD thing where he never takes them off. END_OF_DOCUMENT_TOKEN_TO_BE_REPLACED