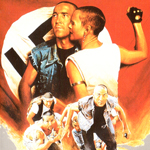 Now that they are murderers, they decide maybe it’s time to get out of town for a bit. Take a vacation in the mountains somewhere outside of Reno. But their rampage continues when they stop at a cafe and pick a fight with some other patrons. After Tiny (Duane Davis, UNDER SIEGE, TYSON, PAPARAZZI) accepts the challenge and outboxes the biggest, dumbest skinhead, Brains (Dennis Ott, “Bar Character,” ROAD HOUSE), their crazy leader Damon (Brian Brophy, CITY OF INDUSTRY) shoots and kills him. END_OF_DOCUMENT_TOKEN_TO_BE_REPLACED