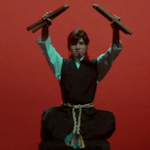 It’s too late to save the man, but he tells Koryu “You have to tell Professor Enmei Oh” and plucks out a false eyeball with circuitry and microfilm inside. The professor (Hideaki Nagai, Ultraman) explains that the dead man was Hong Kong police detective Kidai Sha, who has been investigating the kidnapping of the professor’s daughter Birei (Hisayo Tanaka, THE GREAT CHASE), coincidentally a high school friend of Koryu. The photos show Birei at a place in Hong Kong called Osone mansion, where “many martial artists are gathered,” kind of like the evil mansion in the first film. Also, the late detective had a plane ticket to Hong Kong in his pocket, so the professor asks Koryu to please take it and try to save his daughter. Mission accepted. END_OF_DOCUMENT_TOKEN_TO_BE_REPLACED