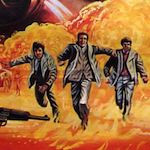 I rented PRISON, of course, and I’ve seen it since then, and it’s pretty good, and stars Viggo Mortensen before he was classy. But until recently I never really paid attention to the fact that Harlin made one movie before that, a Finnish production, but about Americans, and more in the action vein. END_OF_DOCUMENT_TOKEN_TO_BE_REPLACED

RARE EXPORTS is this year’s hottest Christmas horror movie. It’s a killer Santa movie but not in the SILENT NIGHT, DEADLY NIGHT sense – in this one Santa is a monster. It’s kind of like THE THING – an American team finds him frozen in a block of ice under a small mountain. They say it’s actually a burial mound. They dig him up and this might cause some repercussions that could put a damper on the season.
END_OF_DOCUMENT_TOKEN_TO_BE_REPLACED