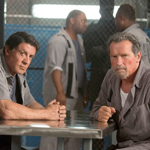 But hey, at least a couple of us were there to appreciate it. ESCAPE PLAN is a solid, enjoyable Stallone vehicle where Schwarzenegger gets to be the joking sidekick. Rob Schneider was busy. END_OF_DOCUMENT_TOKEN_TO_BE_REPLACED