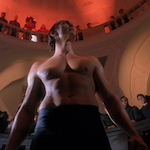 (It should smash cut to a giant ‘4: THE DARK KUMITE’, but no such luck.) END_OF_DOCUMENT_TOKEN_TO_BE_REPLACED