Well, you guys know I’m not much of a TV watcher, but I have managed to keep up with JUSTIFIED, the FX show starring Timothy Olyphant as badass deputy marshall Raylan Givens, a character who originated in Elmore Leonard’s Pronto (although it’s credited to the later short story “Fire In the Hole,” since that’s what the pilot was adapted from).

This week we finally got to meet Raylan’s much referred to pops, who was a bastard as promised but luckily in a small-timer way. Some of the previous references to him made it sound like he was some international super-crook, but in this one he’s mostly an old man who smashes things with a bat. I was hoping somebody recognizable like Robert Forster or somebody would turn out to be the dad, like a surprise casting coup type deal. Instead it’s Raymond J. Barry, who is perfect. What they went for is much better than what I wished for. It’s a great character and great relationship.

My favorite episode so far was last week, though. Raylan went to L.A. after a mob accountant turned dentist played by Cameron from FERRIS BUELLER (looking alot like Anthony Bourdain these days). That was a great Elmore Leonard feel because they get you rooting for this dentist in the opening scene when he removes gold fillings from a rich asshole in the parking lot for yelling at his secretary.

Anyway, I want to point you to this article posted on elmoreleonard.com which reveals that Leonard likes the show so much he’s working on ideas to give them for season 2. Also, the comments here is a good place to discuss new episodes if you ever feel like it.

I know some of you were planning to watch that new FX show JUSTIFIED – what did you think? I thought it was a good first episode, taking advantage of that good side of Timothy Olyphant that we enjoyed in A PERFECT GETAWAY and other things, the opposite of the one that was in HITMAN. The pilot was adapted from an Elmore Leonard story that I haven’t read, and the moronic neo-nazi villains are definitely very Leonard. So we’ll have to see how much of that flavor they can retain with their original stories. But they’re definitely off to a good start with Olyphant’s character, a marshal who’s tougher and smarter than everyone around him, and who gets sent back to Kentucky after his Old West mentality causes trouble in Tampa.

Favorite conversation: when he tells the Jamaican priest about going to a Peter Tosh concert (he wasn’t into it). Favorite scene (easy): when he not only steals the neo-nazi’s shotgun and puts him back in his car, but suddenly bangs his head against the horn.

The pilot reminded me of KAREN SISCO, a surprisingly good Elmore Leonard based show they had on ABC in 2003. Sure enough both are by the same director, Michael Dinner (Mad Magazine’s hilarious parody character of DEATH WISH director Michael Winner). I thought they could never replace Jennifer Lopez as that character from OUT OF SIGHT (still my favorite Leonard movie I think, although JACKIE BROWN is a contender), but after watching a few episodes Carla Gugino became the definitive Karen Sisco for me. It helped that they had Bill Duke as her boss and Robert Forster as her dad. And they did a good job of supplying the criminal-of-the-week characters with personality.

Every time Carla Gugino has another TV show I think “hey, maybe it’ll be a hit and they’ll finally release KAREN SISCO on DVD.” But it didn’t work for THRESHOLD and whatever other shows she was on that got cancelled. So now we’ll just have to hope this one hits big and causes a demand for other Elmore Leonard TV shows. Rights holders please note that Academy Award winner Kathryn Bigelow directed one episode. Let’s see that DVD.

And while I’m at it I never saw that MAXIMUM BOB show either. That was supposed to be pretty good, wasn’t it?

(John Travolta, as badass loanshark turned movie producer Chili Palmer points this out and says, “You know what I have to say about that? Fuck that.” And if only he had repeated “fuck that” again for emphasis I guess he would’ve gotten the R and I could’ve seen this movie in a quiet theater full of adults and not a fuckin high school cafeteria. But that’s a subject for a separate rant.) END_OF_DOCUMENT_TOKEN_TO_BE_REPLACED 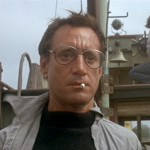 So you figure no fucking way, I’m not paying, instead you tell your wife about the affair and figure that’s that. But next thing you know these fuckers drag you into a warehouse and show you another video where they execute the girl with a gun stolen from your bedroom and wrap her in a coat with your name stitched into it. And they tell you now it’s 105 grand a year or the cops find the body and trace it to you. END_OF_DOCUMENT_TOKEN_TO_BE_REPLACED

So I was an idiot to put off watching the movie as long as I did. What really did it was I was lookin through a used book store (seriously, I read books) when I saw the book MR. MAJESTYK by none other than Elmore Leonard. I pulled it out. The dude on the front was definitely not Charlse Bronson. But I read the back, and sure enough, it was about a badass watermelon farmer. END_OF_DOCUMENT_TOKEN_TO_BE_REPLACED