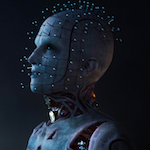 HELLRAISER (2022) is the new straight-to-Hulu HELLRAISER movie. It’s a genuine, bonafide reboot, by the original definition of the term – it doesn’t seem to work as a sequel, but it’s certainly not a remake, it’s just starting over, I guess. And it’s certainly a new start in that it’s getting more attention and being treated more like a real, existing movie than the DTV sequels that came out in 2018, 2011, 2005, 2002 and 2000. That’s partly because it’s a polished, well-directed movie with plenty of production value, and it was intentionally written to be the new HELLRAISER. Much of the series, as you may know, was just a perpetual rights retention machine – the Weinsteins ramming Pinhead into an unrelated horror script and dumping one out so they could retain the rights to dump another one out to retain the rights further down the road. Now, at last, the rights have escaped Miramax Hell and are sheltering at Spyglass Media Group (who also got SCREAM and SPY KIDS. There must’ve been a sale). END_OF_DOCUMENT_TOKEN_TO_BE_REPLACED