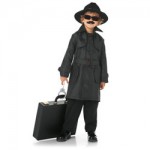 This is the story of a man (me), a famous television critic (Gene Shalit) and a children’s action picture called SPY KIDS PART 2. Three entitities living their separate existences. Independent and peaceful. And it coulda easily stayed that way, if not for the simple words of a newspaper advertisement. But it was not to be. Because of those words, our three lives converged. And we would be changed for a while, I guess.

“THE MOST JOYOUSLY IMAGINATIVE MOVIE OF THE SUMMER! JUST ABOUT EVERY MINUTE IS FUNNY OR INGENIOUS… IN A WORD, FUN-TASTIC!”

Now I gotta be honest. Normally I don’t pay attention to these fuckwads on the ads. I am one of the most important film Writers today and I never been quoted once. So obviously these people aren’t the cream of the crop. But there was something about this quote from Gene Shalit that intrigued me. 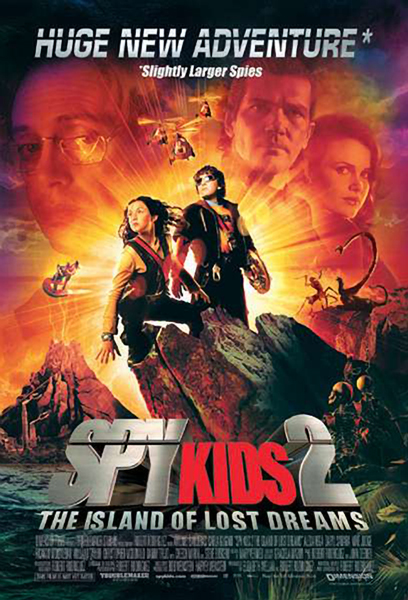 Now first of all let me mention that alot of individuals are down on Gene Shalit, but I’m gonna stand up for him here. Like me, he has a criminal past. Yeah, he used the “senior moment” defense instead of the more honorable “just some bullshit”, but he’s still one of our guys. Now I don’t know what it is about the guy that makes people belittle his work. Maybe it is his ridiculous hair and mustache, or the funny voice he talks in, or the bad puns he uses, or the incredibly bad taste he has in movies. I don’t know. To tell you the truth come to think of it I hate this fuckin guy. I think maybe I was thinking of somebody else. Never mind I’m not gonna stand up for Gene Shalit. But I am going to tell you what about his quote intrigued me: the word “fun-tastic”.

The Webster’s dictionary defines “fun-tastic” as… well, nothing. Because fun-tastic is not a word. And no smartass, it’s not two words either. Two words with a dash between them still counts as only one word, in my opinion. Anyway as far as I can tell this strange new word is some kind of contraction or compound word, which combines all the powers and distinctive qualities of the word “fun” with those of “fantastic”. But really, what is there that is “fantastic” that is not, by definition, already fun? And isn’t fun a fantastic thing to have? Maybe it is a shorter way of saying “fantastic fun”, but then wouldn’t it be “fanta-fun”, to keep the words in the right order? By removing the “fan” from “fantastic” is Gene saying that it is somehow less than fantastic, but still alot of fun?

Today I learned many things about what it takes for an old man to have a fun-tastic time. And I also learned about what kind of freaky ass shit your kids are watching today. For example they have a movie coming out where there are cartoon vegetables that talk. They are pirates and it is also the bible. There is a caterpillar involved who has a funny accent. There is also a cartoon about Adam Sandler. And because Miramax is putting out a dubbed SHAOLIN SOCCER, they made yet another update of the song “Kung-Fu Fighting.” Because that song never gets old.

What in fuck’s name is wrong with all you people.

SPY KIDS PART 2 is directed by Robert Rodriguez who did the great MARIACHI series. Now he does kiddie pictures. This one’s about two little kids who work for a government agency using all kinds of magic gadgets to fight weird creatures and scientists. There is lots of little kid stunts and fighting. They do kung fu, they dance, they fly around on little jets and fight skeletons and monsters. Antonio Banderas is their dad and Ricardo Montalban is their grandpa, in a flying wheelchair.

This is not really a good movie for the adults without kids (me and Gene Shalit). It is pretty empty, just trying to impress with lots of little computer effects and kiddy fantasy fulfillment, and the occasional poo or booger joke. To be frankly honest I wish they had this kind of crap when I was a kid. The little boy Junie is just a regular lookin pudgy little kid, but he gets to do badass kung fu, wear a little tuxedo and dance ballet at a formal ball. Everything you wanted to do as a kid, except also ballet. He gets to drive vehicles, climb up shit, fly around, play a long guitar solo, etc. There is lots of typing on funny lookin computers with big round buttons. At the end he is disillusioned by the lack of honor in the spy world and vows to retire, which proves that he is a good kid. This is actually a pretty smart theme in the movie – most of the characters are willing to switch sides constantly to be on the winning side or to save themselves, but the little boy knows who he is loyal to. Obviously, there aren’t many little boys in the CIA, FBI or Bush Administration.

In a way this is a new type of movie, a mid-level effects extravaganza. Robert Rodriguez did not have a Star Trek type budget behind his movie but he used the same digital cameras (which actually look fine) and crammed the whole movie full of computerized creatures and weapons and stunts and backgrounds and flying vehicles. They are able to fit more gimmicks in there than they could when we were kids because it doesn’t cost as much. Plus they got Bill Paxton in a small role.

This is not a realistic style. The creatures do not look as real as the dinos in jurassic park or what have you. The backgrounds like at the amusement park at the beginning sometimes look cartoony and phoney. You can tell they’re blue screened and the skeletons they fight are deliberately flickery like the ol’ stop motion ones they are a reference to. They probaly coulda spent an extra $40 million and made it all look more photo-realistic, but then it would still be the type of movie where Antonio Banderas suddenly announces that he once did the kid’s dental work for a year and that was so he could implant special tracking devices in their teeth which happen to be non-electrical so they will still work despite the fact that the kids are on an island with a special gadget that prevents all electric devices from working.

So why bother? It’s all about how many silly gimmicks, goofy adventure and every robot, flying vehicle or monster you can fit in, not about how convincing you make them look. If you are ten or have a ten year old with you (yours, by the way, none of this kidnapping bullshit that’s goin around) then you’ll have a great time. That’s the whole point of the cinema fun-tastique.

Robert Rodriguez
This entry was posted on Wednesday, August 7th, 2002 at 7:06 am and is filed under Family, Reviews. You can follow any responses to this entry through the RSS 2.0 feed. You can skip to the end and leave a response. Pinging is currently not allowed.