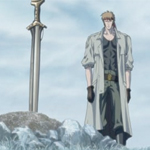 It’s a well told (if simple) tale and the design and animation are legit. Director Yoshiaki Kawajiri also directed WICKED CITY, NINJA SCROLL and VAMPIRE HUNTER D: BLOODLUST, plus segments in THE ANIMATRIX and BATMAN: GOTHAM KNIGHT. Shit, I’ve seen some of those! He also wrote the live action AZUMI 2. But the screenwriter for this one is David Abramowitz, a writer, producer and creative consultant for Highlander: The Series and Highlander: The Raven. END_OF_DOCUMENT_TOKEN_TO_BE_REPLACED