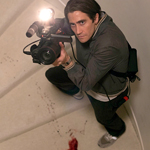 When he learns he can make a living listening to a police scanner, chasing down these tragedies and shoving a camera in there, it quickly becomes clear that he has a natural talent for it. He’s not only completely willing to get in the way of cops and paramedics in life and death situations, he’ll also walk into a house where a shooting has taken place, film the bodies, move things around to make the shots more compelling. Here, get this happy photo of the victim next to this bullet hole. Perfect. END_OF_DOCUMENT_TOKEN_TO_BE_REPLACED