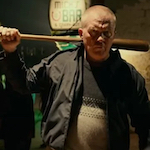 When I went to the first show on Friday I had already seen enough comments online to sense that many or most people disliked, strongly disliked, or flat out despised HALLOWEEN KILLS, in many cases sounding like they were prepared to live for decades as recluses building traps and practicing firearms on mannequins to prepare for when it comes for them again. I clearly don’t have my finger on the pulse of what other horror fans are looking for these days, because I’m positive had I seen it before hearing anything about it I would’ve figured it would go over well. As a guy who enjoys all but one of the HALLOWEEN movies on some level and will keep watching them over and over forever, I feel like it’s plain as day that KILLS has more on its mind than most of them, looks way better than most of them, and finds an approach that’s very different from what we expect or are used to, feeling fresh and new despite being more reverent of the first film than any previous sequel. It’s the kind of thing where if I didn’t like it so much I would have to at least respect it. But many people obviously don’t see it that way. END_OF_DOCUMENT_TOKEN_TO_BE_REPLACED