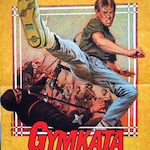 But it’s a pretty damn 1985 movie so I decided to revisit it for this series. It stars Kurt Thomas, five-time NCAA champion and International Gymnastics Hall of Famer who won six medals at the 1979 World Championship before the aforementioned protest of the 1980 Summer Games. He plays Jonathan Cabot, also a gymnast of some kind. We see him on the parallel bars, and then all the sudden some suit from the Special Intelligence Agency is briefing him for a top secret mission to the secluded country of Parmistan. His dad (Eric Lawson, who played a sheriff in TALL TALE, RUMPELSTILTSKIN, WHEN TIME EXPIRES and KING COBRA) was an agent who disappeared there competing in “The Game,” a thing they apparently do frequently where foreigners try to run an obstacle course while locals on horses with helmets over ninja masks shoot arrows at them. If somebody actually survived the country would offer them any favor they want. Help you move, give you notes on your screenplay, anything. END_OF_DOCUMENT_TOKEN_TO_BE_REPLACED