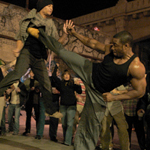 The ten year anniversary of BLOOD AND BONE is coming up next year, so I’m giving the rights-holders and the gatekeepers a heads up. I want to see a cool, respectful collector’s edition Blu-Ray with added extras and a painted cover and shit. I want to see theatrical screenings. I am positive this will play great with audiences. Make it happen. A parade would be cool too, but that’s negotiable. END_OF_DOCUMENT_TOKEN_TO_BE_REPLACED

But you know what, some of Lee’s friends and students are in it, so they must’ve approved. For example, Chuck Norris. Oh wait, that’s just clips from WAY OF THE DRAGON. Well, what about Kareem Abdul Jabbar? Oh wait, that’s some other tall black dude in sunglasses, because Kareem didn’t want to take part in the new scenes. END_OF_DOCUMENT_TOKEN_TO_BE_REPLACED