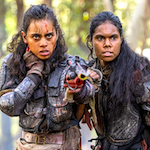 When I caught on to ROAD OF THE DEAD it was one of those situations where I assume I’ve run out of reasons to watch new zombie movies and then I see it and think “Okay, never mind. That’s a good reason.” The main gimmick that differentiates this apocalypse from others is that the meteor that caused the zombie outbreak also changed the earth in such a way that combustible engines no longer work. But then some guys figure out that the green fumes exhaled by the zombies can be harnessed as fuel. So this is a world where road warriors attach tubes to zombies’ mouths, strap them onto the back of their vehicles and burn rubber (or dirt). END_OF_DOCUMENT_TOKEN_TO_BE_REPLACED 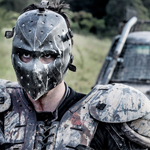 It starts right around the beginning of the zombie apocalypse, the morning after a freaky meteor shower, when most but not all people have gone ghoul. It centers on a small group of survivors, flashing back to show how it started for each of them. The lead, Barry (Jay Gallagher), kept reminding me of Scott Adkins, and though not a martial artist his character is a fighter, as in he gets in fights. In fact, early on, when a zombie is blocking the road and Barry’s companion (Yure Covich, FEED) is saying he “just can’t get used to” them existing, Barry says “Fuck it, I’m gonna fight ‘im,” gets out of the car and starts punching the thing. END_OF_DOCUMENT_TOKEN_TO_BE_REPLACED