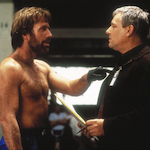 Let’s set the scene a little. Norris was already well established as a movie star, having released one movie a year since ’77 (and two in ’82). His first independent starring vehicles BREAKER! BREAKER!, GOOD GUYS WEAR BLACK and A FORCE OF ONE were all successful, leading to studio releases THE OCTAGON, AN EYE FOR AN EYE, SILENT RAGE, FORCED VENGEANCE and LONE WOLF McQUADE. MISSING IN ACTION, his first film on a new multi-picture deal with Cannon, had been a big hit. END_OF_DOCUMENT_TOKEN_TO_BE_REPLACED