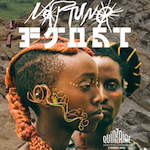 It’s set in Rwanda, and begins in a coltan mine. Skinny men in the sun chipping at rock with various tools, harvesting ore for capacitors used in phones and computers they mostly can’t afford. One miner named Tekno finds a big piece of coltan (I thought it was a fossil), becomes enamored with it and holds it aloft. An overseer yells at him to keep working, and hits him in the head. He falls over, to the horror of his brother Matalusa (Bertrand Ninteretse), and dies. The others are upset but forced to return to work. They drum and chant and create a beat with their work. 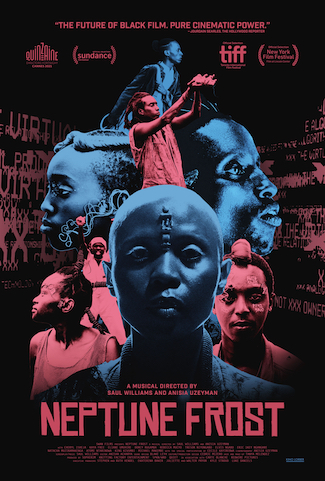 Matalusa is understandably disillusioned. The church isn’t much help – a preacher tries to take advantage of him, he defends himself, and has to flee.

It’s when he pulls out a crystal-shaped handheld computer that I first understood this was taking place in the future. On his screen he learns of a protest. University students battle cops whose uniforms are pink shirts with wire grill masks. The protesters sing a song about “These Motherfuckers Won’t Back Down.” (Actual title: “Aba Babono (These MTHRFKRS).”) Matalusa starts to sing the song to himself and hears it around him as he travels. It’s in the air.

He and the movie take a turn into the mystical one night when he’s visited by “the Wheelman,” a sort of oracle with glowing blacklight bicycle wheels spinning over his head. Hard to understand, but very cool looking (as describes much of this movie). He gives Matalusa a dream that leads him to what is described as another dimension. There he meets some cool anti-capitalist hackers who live in a village made out of discarded electronics.

Here’s what could be a sticking point for some, but as always I counsel open-mindedness. The storytelling here is very cryptic, or at least I had trouble following some of it. The other lead character Neptune is an intersex character and is played by two actors, Elvis Ngabo and Cheryl Isheja. There’s a strange ritual involved in the switch and I incorrectly (maybe stupidly) mixed it up and thought Matalusa had turned into Neptune. They’re cosmically connected, but separate characters, I realized later when they meet up. I don’t know if any of it is intentionally ambiguous or if it’s all on me, but either way I found that trying to decode it all is a fun part of the viewing experience. Give it a shot.

There’s this phrase that keeps getting used in the movie, “Unanimous Goldmine.” I was confused what it meant. Then when it was used at a clandestine meeting between rebels, I thought it was a code word. Then I thought it was somebody’s name. After all this a character explains that it’s a greeting with a particular cultural context, but that I didn’t fully follow either. It’s like the movie puts you in the company of people you need to work to keep up with, but you think they’re cool so you just nod like you understand and try to catch up. 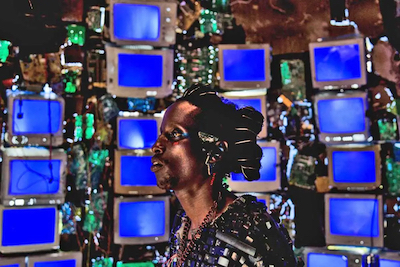 Some of the coolest stuff in this movie is the very DIY electronic waste reconfigured into objects – mini-pyramids, jewelry, even a prosthetic hand made out of recycled circuit boards, diodes and wires. Hats off especially to the jacket covered in keyboard keys, with the space bar on the shoulder. There’s a set with stacks of old 4 x 3 TVs that reminds me of JOHNNY MNEMONIC, and the fact that that movie was directed by a painter who started out thinking it would be an arty low budget indie. That’s what this is! And it has a similar cyberpunk spirit of hijacking technology to rebel against the corporate and authoritarian powers that be, except in the specific context that it’s African workers fighting a global imbalance exacerbated by the technology made from the materials they literally kill themselves to dig out of the ground for very little pay.

The protagonists hack something that gives them all i-fi (if I remember right), free internet, kind of. They have an idealistic view of it like we kinda did in the ‘90s, which is fair since a lack of internet access is a genuine equality issue – poverty preventing access to all the things in society that require internet, creating a feedback loop of more exclusion and poverty. But the songs “Ubujiji Nemera (Down for Some Ignorance)” and “Ubukungu Mu Bwishi (Roach Eggs)” seem to indicate they’re also exposing themselves to the materialism and celebrity obsession we all have the luxury of complaining about on social media. So they have to get past that to use technology as a tool of liberation.

NEPTUNE FROST is directed by Saul Williams and Anisia Uzeyman. Williams is an American poet, Uzeyman is a Rwandan actor and director. He’s the writer, she’s the cinematographer, and they’re married. They filmed in Rwanda with a local cast and crew.

According to IMDb, the languages used are Kinyarwanda, Kirundi, Swahili, French and English. I’ve read that this is normal for the region – locals speak many languages and tend to mix and match. At first I was surprised to see Williams, whose mastery of words is his super power, writing so many poems and lyrics not in English, but then I remembered that he had moved to Paris for a while.

He was the reason I sought this one out. I’ve been a fan since his starring role in SLAM (a viewing I memorialized in this column 22 years ago but I’m afraid to read it to see how bad it is). I haven’t seen SLAM in 20+ years, but I think my residual respect is justified after rewatching this scene where Williams’ character uses a poem to get out of a prison fight:

Since then I’ve followed his career and especially enjoyed his first two albums Amethyst Rock Star (produced by Rick Rubin) and Saul Williams, plus his Not in My Name anti-Iraq-war EP with DJ Spooky, and his books Said the Shotgun to the Head and The Dead Emcee Scrolls. Maybe the only poetry books I’ve bought that weren’t by Shel Silverstein or somebody.

Obviously a slam poet turned musician and filmmaker isn’t gonna make universally accessible works. My best attempt at describing his sound is a Last Poets for the hip hop generation mixed with electronica and the Black Rock Coalition. His tone is extremely earnest, his allusions are diverse and lofty, his musical adventurousness generally alienates me on at least a couple songs per album. But I love the way he connects hip hop culture to ancient spiritual traditions – beatboxing, using an “OM” meditation chant, quoting Public Enemy and talking about planets and eternity in the same breath. “We threw basement parties in pyramids.”

The first song on his first album is one of my favorites because of the line “My Adidas – are three years old, like my daughter.” But there’s also a part that’s a pretty good description of his musical style: “Music of the ghettos, the cosmos… Dissection of drumbeats like Osirus by Seth, breakbeats into fourteen pieces dissemble chaos, organize noise, a patchwork of heartbeats to resurrect true b-boys. B-men.”

And the soundtrack to NEPTUNE FROST is an evolution of that. I was surprised when a little ways into the movie I realized it was also an extension of his 2016 album MartyrLoserKing. When Neptune hears the name “Matalusa” she hears it as “Martyr Loser,” and he starts referring to the “Martyr Loser Kingdom” (which I guess is the name of the hacker collective). The movie includes new versions of the album’s songs “Think Like They Book Say,” “Burundi,” “That Noise Came From Here,” “Groundwork,” “Down for Some Ignorance,” “Roach Eggs” and “All Coltrane Solos at Once” (great title). The album also has a song called “The Bear/Coltan as Cotton.” So these are concepts he’s been working on for a while.

Here Williams’ voice is heard on at least one song, but most of the soundtrack is sung or rapped or chanted by the actors, live to camera from the sound of it, their voices good but natural, not slick or polished, sometimes hoarse, with background noise/sound effects audible. I really like this lo-fi approach combined with the collage of distorted beats, synth riffs and haunting loops. It works well with the movie’s home made afrofuturist vision.

I know many readers here wouldn’t enjoy NEPTUNE FROST, but if you can get down with something really esoteric and “cyberpunk SPACE IS THE PLACE” sounds cool to you then there’s a chance you’ll adore it. If that might be you and you have a safe theatrical opportunity, I recommend that. If I wasn’t afraid of small public spaces during Covid I would’ve loved to see it at Seattle’s Grand Illusion Cinema, where I’ve heard it’s done really well. But it’s now on VOD, and coming to blu-ray and DVD from KinoLorber August 9th.

I guarantee it’s unlike anything you’ve seen before. For me it’s the rare movie that I felt like I didn’t fully get it but still loved enough that I want to keep trying.

P.S. As good as that other scene is this is what I remember being my favorite part of SLAM. You can see what different people these two are from where their minds go when they freestyle, but fictionally they’re united by the situation they’re in, and in reality by music. It’s beautiful.

afro-futurism Anisia Uzeyman cyberpunk Rwanda Saul Williams
This entry was posted on Wednesday, July 13th, 2022 at 4:44 pm and is filed under Musical, Reviews, Science Fiction and Space Shit. You can follow any responses to this entry through the RSS 2.0 feed. You can skip to the end and leave a response. Pinging is currently not allowed.