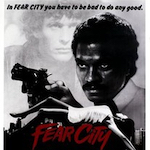 He’s troubled, though. One of those guys who likes to go out to some spot on the shore where there’s nobody else around and just look across. Day or night, doesn’t matter, the man likes to brood with good scenery. And he has flashbacks about the fateful boxing match. It really changed him. 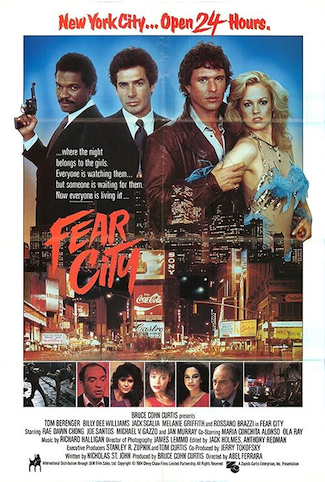 At one of the clubs there’s a dancer on stage, Loretta (Melanie Griffith between BODY DOUBLE and SOMETHING WILD), that the club owner is raving about. It seems a little over the top for a dancer doing a pretty standard PG-13 dance. Not that I expect her to be a true artiste like Alex in FLASHDANCE, but I question whether anybody would really be treated as a superstar for this act. Admittedly, the club is packed. She seems to bring ‘em in.

Rossi watches her from the window in the back office and we find out he’s being weird about her because she’s his ex, and he obviously hasn’t gotten over her. She still cares about him but is now in a relationship with another dancer named Leila (Rae Dawn Chong between BEAT STREET and CITY LIMITS).

The people running these clubs fear this vice cop named Wheeler (Billy Dee Williams between RETURN OF THE JEDI and TERROR IN THE AISLES) who comes in, sees a woman dancing on the bar and says, “I’ll close your business if you don’t keep pussy off the bar.” “Very sociable guy,” says one of the mobster guys when he leaves. But they really should be concerned about the same guy Wheeler is concerned about: a serial attacker dubbed “The New York Knifer” (John Foster, no other credits). He’s specifically targeting dancers, attacking them in alleys when they’re leaving work and slashing them (though carefully avoiding major arteries). 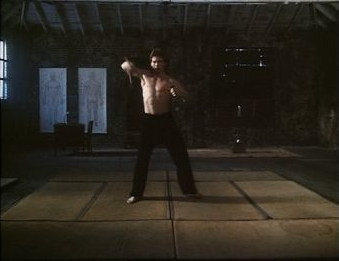 Here’s where the movie really gets into my wheelhouse: the guy is a martial artist. It keeps cutting to him in his sparse warehouse hideout with giant anatomy illustrations on the wall, doing katas, sometimes spinning nunchakas. And to show what a grade-A kook he is he follows his attacks by writing breathless prose in his journal, with phrases like, “Her eyes pleaded for mercy. There is none.”

The club owners are not very helpful to Wheeler or protective of the dancers until it starts to affect their bottom line. After Leila is hospitalized the other top dancers are too scared to come in, and customers keep walking out on the stringers. One of the owners chases a guy out saying, “The show’s not over yet!” and “I’ll give you a discount!”

The attacks escalate from slashing to killing, and even decapitating with a sword. One of the highlights for me is the MANHUNTER-meets-KICKBOXER moment when the club owners meet and agree to pool their resources, and one of them says, “Okay. Now let’s go find this motherfucker,” and it cuts to the guy naked doing katas. But the peak is when Rossi has decided to hunt him down and we cut back and forth between training montages – the killer doing his evil karate and Rossi shadowboxing in front of a mirror, looking at a wanted poster, jump roping, doing handstand pushups, plus patrolling the streets and making hospital visits.

By now the death of Leila has sent Loretta spiraling back into drug addiciton. She goes to meet her dealer Jorge (Juan Fernandez, “Orderly,” UNCOMMON VALOR) only to find him hanging in an alley, and the killer stabs her. But suddenly Rossi is standing in the alley and we get to have the duel we’ve been waiting for: anti-hero vs. psychotic killer, ex-boxer vs. karate master. Rossi’s career and relationship and life were ruined by accidentally beating Kid Rio to death in the ring, and now he has to try to rekindle his old skills in order to purposely punch this guy to death in the streets. 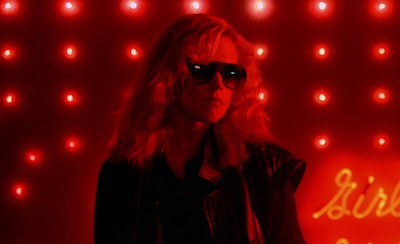 This is a cool movie. I mean, I’m not so into serial killer thrillers but you tell me the guy does karate and somebody’s gonna have to fight him to take him out – now I’m interested. I love it as an action device, I love it as an absurdity, I love that treating it so solemnly makes this killer’s antics seem more perverse than silly. But I do think it could work even better than it does. It doesn’t feel as arty as many of Ferrara’s best, but it also doesn’t have the full on karate that it would if it was a Jalal Merhi movie (I also watched TIGER CLAWS this week, which is about cops tracking a martial arts killer, so he’s on my mind). Someone named Harlan Cary Poe is credited as martial arts choreographer. His only other stunt credit on IMDb is as stunt coordinator of the 1990 John Turturro movie MEN OF RESPECT, but he has bit parts in a bunch of movies including TAXI DRIVER and the Berenger joints SOMEONE TO WATCH OVER ME and THE DOGS OF WAR.

I can’t complain. This transported me to a seedy, smelly world to watch a burnt out used-to-be pull himself together to punch a psychotic karate man to death in an alley. That’s what I want out of cinema. Also, the stage is set perfectly with the theme song “New York Doll,” by David Johansen, formerly of the New York Dolls, although I’ve always known him as Buster Poindexter of the Saturday Night Live Band.

Yeah, that song right there, that’s what FEAR CITY feels like. We need more theme songs like that and more movies that fit them this well.

This was written by Nicholas St. John, who worked exclusively with Ferrara, writing two shorts and nine features from Nicky’s Film (1971) to THE FUNERAL (1996). They went to high school and college together and were a team, though St. John refused to have anything to do with BAD LIEUTENANT because of his Catholicism. Ferrara says his old buddy stopped working because “at a certain point he just had enough, you dig?,” though he did later write “a horror-thriller called BILLY’S PEOPLE” with Nicolas Winding Refn (it was never made).

Shout! Factory released a blu-ray of FEAR CITY that includes the original theatrical version and an unrated version that’s about two minutes longer. The unrated shots are of a much lower quality transfer, so you get to see what they cut – mostly lesbian love. Also Loretta suggestively sucking on a hairpin. And Matt pulling her hair a little during sex. But also some extra nunchaka spinning, so yeah, obviously watch the unrated.

Abel Ferrara Billy Dee Williams David Johansen Jack Scalia Melanie Griffith Nicholas St. John Rae Dawn Chong Tom Berenger
This entry was posted on Tuesday, February 8th, 2022 at 7:16 am and is filed under Crime, Reviews. You can follow any responses to this entry through the RSS 2.0 feed. You can skip to the end and leave a response. Pinging is currently not allowed.