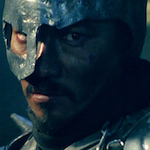 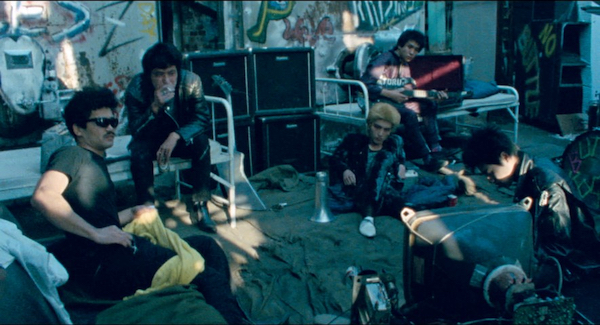 Some of them have drag races and work at garages, but quit that job because they’re “much too artistic” for it.

One thing I like about futuristic dystopias and post-apocalypses is that people seem to drop societal expectations and be more wild about expressing themselves with fashion. Obviously much of that is tribal, maybe it’s just adopting a new set of rules. But it’s gotta be kinda fun when you’re free to stop giving a shit what people think and start wearing face paint and spikes and chains and stuff. 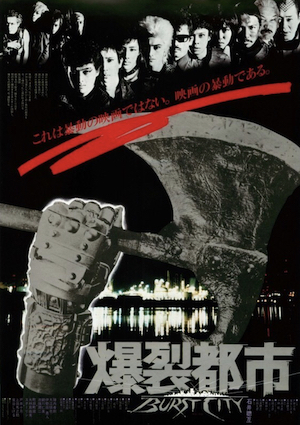 In this case we got the punk guys with their leather jackets and ‘50s inspired style. They can have crazy hair dos, bleach blond, weird makeup. We got some Yakuza type guys here called the Kikukawa Clan, who still wear suits and ties, but even one of those guys has a web tattoo along his hairline and wears a feather earring. And there are bikers who wear lumpy helmets and armor. Some of them seem to have cybernetic additions. One guy smokes holding his cigarette in a weird mollusk-like claw. And they eat chunks of meat wrapped in newspapers.

Women are not treated well in this world. Actually, you don’t see that many of them. But one part of the plot I did follow is the part about the aforementioned feather earring guy pimping out his girlfriend to an “important client.” She always looks so sad and he keeps telling her it will only be “a little bit more.” When she finally stands up to this “client” and calls him a sicko he kills her. Fortunately the rest of the movie isn’t as sad or fucked up. 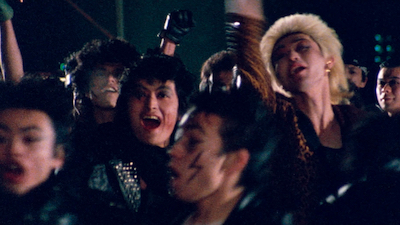 A bunch of Japanese punk bands of the time, including ones called The Roosters, The Rockers and The Stalin, star in the movie. I can’t say I know a single thing about their scene, and even American punk hasn’t been my thing outside of a 2 year window around middle school and some residual fondness for the Dead Kennedys, but man does it work perfectly in this movie. They’re often performing and there’s usually some rock ’n roll on the soundtrack when they’re not. Two of the bands seem to have a rivalry. One of my favorite sequences is when the leather jacket guys are performing their song “Wild Beat in the Supermarket” and another band, identifiable by their bright red handkerchiefs and/or ski masks, rush the stage with wooden bats and start beating the shit out of them. After a while the drums start up again and I thought for a second the drummer decided to just keep going, but then I realized this other band was bum rushing. They take over the show until cops show up. Then the red guys slip away and the people who originally organized the show take the blame.

It’s kind of funny because you’re surprised to learn this late in the game that there even are cops in this world. They’re pretty normal ones but their cars say “BATTLE POLICE” on the side.

One of my favorite things in movies is grainy 16mm pristinely transferred to blu-ray. Here I like to think it gives the proceedings a little bit of a xeroxed flyer texture. There are some shots that are undercranked, or black and white, or black and white with tinted red. But it’s mostly those little dots skanking around, adding even more dirty, chaotic energy to the proceedings. 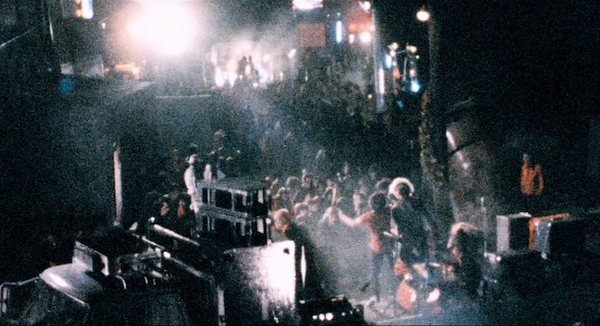 The most noticeable stylistic feature is the beautifully messy handheld style. I’m not normally one for shakycam, but in this case it doesn’t feel like it’s obscuring anything, it feels like it’s putting you right in the middle of the action. In fact, strapping you on top of it. It’s a movie about noise and speed, and opens with footage of speeding cars that reminded me of the original MAD MAX. Cameras strapped to hoods, to motorcycles, even to a guy’s head – a closeup of his short mohawk blowing in the wind. I can’t be sure but I absolutely believe they had him really hauling ass on a motorcycle for authenticity.

When the first band starts playing, the camerawork is incredible. It’s in the pit and starts shaking around when the crowd does. Then it’s on the guitar strings, over the drummer’s shoulder, all the places that are most exciting to see. It’s like the energy of the music is so infectious it seeps into the camera. Cinematographer Norimichi Kasamatsu went on to shoot the Japanese UNFORGIVEN remake, among many others.

Most of the movie takes place at night, outside (I think), in weird places surrounded by wreckage and junk. It’s hard to know exactly where you are, where the crowd ends, which way you would go to get out. It really reminded me of the feeling I had as a younger teen going to punk shows, only kind of understanding what was going on around me, but trying to go along with it as if I belonged. 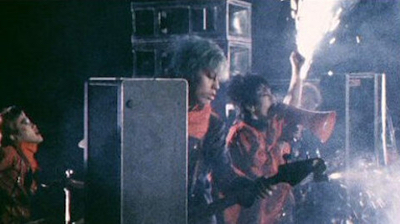 Later in the movie the red handkerchief guys are playing on the back of a truck, moving through a big crowd, taunting that they have to listen to them. They sing a song about “what a toilet of a world” and pig testicles and cow shit in their refrigerator. Later the Battle Police show up and the band throws a pig head and intestines at them. Unfortunately, the Battle Cops are armed with some kind of electrified nightsticks that shock the band (animated jagged lines around them) and they explode! The rival band sees this happen and pauses for a beat before the singer says, “Hey guys – let’s take it up a notch!” and start playing again.

Eventually things escalate to a higher level of Battle Cops who wear futuristic white armor and carry giant cannons. But nobody’s backing down. And they start blowing up buildings. I only learned from Wikipedia that this was all a protest against the nuclear power plant being built nearby. I thought it was just a vibrant night life of Burst City. 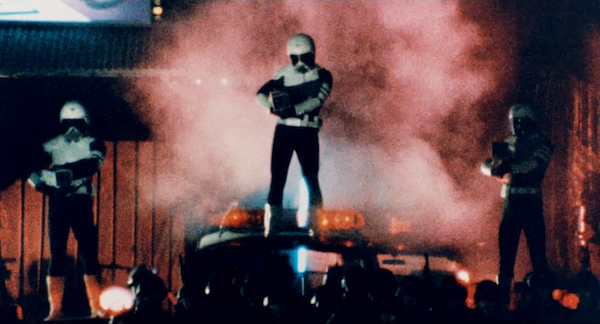 I went into this blind, but afterwards I learned that BURST CITY was part of a movement called jishu eiga (roughly autonomous film or self-made film), different from the previous generation’s independent film movement because it was no budget, no skills, amateur. He says this was low budget compared to a commercial film, but large for a jishu eiga, which obviously shows – this thing is huge! So many extras, so many vehicles, so many beautifully trashed locations.

Director Sogo Ishii had discovered rock from living near American military bases, and sang and played guitar in various punk bands. When he started college in 1977 he applied a punk ethos to making his own films, starting a collective called Crazy Film Group, borrowing cameras from the school and just going for it. Though he was only 18 when he made BURST CITY, it was his third feature! He’d already co-directed a mainstream remake of his 8mm short PANIC IN HIGH SCHOOL for Nikkatsu, and Toei had bought his second film CRAZY THUNDER ROAD. Jishu eiga was largely for people who wanted to make films but couldn’t get into the industry, but here was the industry trying to get into jishu eiga.

Later in his career Ishii had trouble getting funding for a while, so he started directing videos for Einsturzende Neubauten and stuff until he had a comeback. In the ‘90s he had an experimental noise band called MACH-1.67 with the actor Tadanobu Asano (THOR, MORTAL KOMBAT) and in 2000 he directed two movies I’ve heard of but not seen yet – GOJOE and ELECTRIC DRAGON 80.000 V. Okay, I’m interested now.

dystopian futures Japanese punk jishu eiga punk Sogo Ishii
This entry was posted on Monday, February 7th, 2022 at 6:57 am and is filed under Music, Reviews, Science Fiction and Space Shit. You can follow any responses to this entry through the RSS 2.0 feed. You can skip to the end and leave a response. Pinging is currently not allowed.