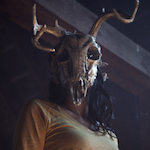 But it’s been on disc for a while (and it’s on Hulu) and now that I watched it I’m happy to find that it deserves the attention. I’ve seen it compared to FRIGHT NIGHT, which makes sense because it’s about a teenager who sees something crazy going on next door and has to take matters into his own hands because nobody believes him. The tone is pretty different, though. To me its characters and world (at least the realistic part) seem more grounded. 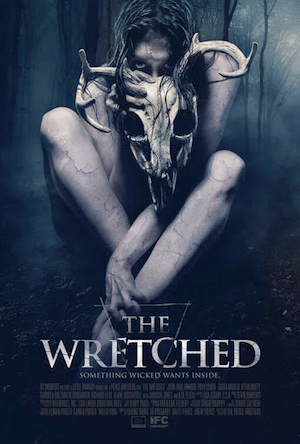 Ben (John-Paul Howard, HELL OR HIGH WATER) is a kid who comes to stay with his dad (Jamison Jones, DARK BLUE) in a small tourist town. He has to work for his dad at the marina, where he hits it off with a cool co-worker named Mallory (Piper Curda, AMERICAN PIE PRESENTS: GIRLS’ RULE) and gets invited to a party. Some may see it as a negative how much time is spent on his courtship and bonding with Mallory, and his failure to fit in with the other jerks in the town, but I think it really works. It feels like a well made indie teen movie that takes its characters seriously, and I like the way that juxtaposes with a folk tale type monster that comes out of a hole in the woods to snatch your children. Because that’s what we’re dealing with here. If there was a Hellboy in this movie it’s the kind of thing he’d take care of, but there’s not, so this regular, troubled kid has to figure something out. It’s all handled seriously and credibly, though not without humor between the characters.

Ben’s next door neighbor Abbie (Zarah Mahler, BEYOND SKYLINE) is a cool tattooed lady with two sons, a baby named Sam and a pre-teen named Dillon (Blane Crockarell, DOLLY PARTON’S COAT OF MANY COLORS), who Ben gets to know a little when he takes sailing lessons at the marina. What he doesn’t know is that when Abbie and the kids were out in the woods one day they were spotted by this evil thing that lives under a tree. It comes to their home inside a deer that they hit in the road and took for meat. We catch a little glimpse of it crawling out of the carcass and scurrying away.

When Ben hears and sees some weird business, he starts watching the house, and things get weirder. This creature or witch or whatever it is gets inside Abbie, causing her body to creak and rot, but it’s able to pass for human. A more unusual thing is its ability to whisper into people’s ears and make them forget the existence of their children. How many people are there living near these woods who didn’t notice their kids got eaten?

The relationship between Ben and his dad is really well done. They seem to like and care about each other but also be kind of fed up with each other’s shit at the moment. There’s some tension about an impending divorce, a new girlfriend (Azie Tesfai, Supergirl) and some personal problems that they mostly talk around (we learn that the cast on Ben’s arm is from falling out a window after breaking into a house to steal pills). There are normal father-son issues like Ben ditching plans with his dad and coming home drunk, which nicely overlap with the fact that also he saw a child-eating witch next door and he sounds crazy when he talks about it.

I’d say what they’re going for is closer to respectable horror than exploitation or slick commercialism, but it’s not one of those frustratingly minimalistic ones. You do get some looks at the creature and there’s some brief but effective nastiness. There’s also a pretty cool twist that comes fast and furious in a way that suggests that yes, they want us to have fun and be entertained and what not. What I’m saying is I don’t think those with an aversion to “elevated horror” need to fear this one.

The writer/directors Brett and Drew Pierce (credited as The Pierce Brothers) filmed in their home state of Michigan. It’s their second feature film, after a zombie comedy called DEADHEADS released back in 2011. Since then they’ve worked jobs like being artists on American Dad and Futurama, respectively. Low budget, high quality horror movies that do well in drive-ins are kind of a family tradition: their dad, Bart Pierce, worked on Sam Raimi’s early Super-8 shorts and did photographic effects for THE EVIL DEAD. According to the book The Evil Dead Companion by Bill Warren, Pierce and Tom Sullivan spent three and a half months in the Pierce family basement and garage shooting the showstopping FX sequences like the climactic “meltdown” and the animated spider-webbing leg veins. Pierce had wanted to do everything in live action, Sullivan in stop motion, until they realized they could do a combination, with Pierce in charge of photographing them.

The oldest of the brothers, Brett, was somewhere around two years old at the time. He told the Detroit Free Press that he walked in on them projecting something on a sheet and was terrified of horror movies until he was 15. I’m glad he got over it.

Azie Tesfai Blane Cockarell Jamison Jones John-Paul Howard Piper Curda The Pierce Brothers Zarah Mahler
This entry was posted on Monday, October 26th, 2020 at 10:05 am and is filed under Horror, Reviews. You can follow any responses to this entry through the RSS 2.0 feed. You can skip to the end and leave a response. Pinging is currently not allowed.

2 Responses to “The Wretched”