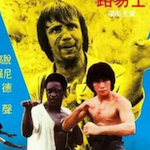 This is another Hong Kong production from the same director as SOUL BROTHERS OF KUNG FU, Hua Shan (THE SUPER INFRA-MAN), but the interesting thing is that it was filmed in Phoenix, Arizona. You don’t see that every day. Unfortunately, it’s a period piece, so they stay away from urban areas and just shoot in, like, a strip of ugly grass, or a gravel pit. The Hong Kong setting of the other one was far more interesting to look at.

Not that I could tell for sure it was a period piece. An early scene with Chinese people gambling on top of railroad tracks made me think they were building the railroads, but since they didn’t have the budget to, like, show them hammering, I started to question that. Scott plays Tom, whose family’s clothes and cabin made me think maybe it was supposed to be reconstruction era. But other characters wear pretty ‘70s looking shirts and pants, so I started to wonder if this was just a foreigner’s view of the rural poor in America. But we see none of the Adidas gear of SOUL BROTHERS, no cars, and one horse at the end.

The IMDb summary will explain it to us:

“When a Black Panther’s whole family is wiped out by a ruthless band of assassins, he’s determined to avenge their murder. The gang think he’s weak but they didn’t reckon with him employing the aid of a martial arts genius.”

Wait a minute – Black Panther? That part’s definitely not true. I gotta believe the summary from carlscottkungfu.com: “A HARD WAY TO DIE takes place in the American West during the era when the railroad was being built. Scott’s family is killed after refusing to sell their land to corrupt railroad executives.” Okay, so that’s what was happening. 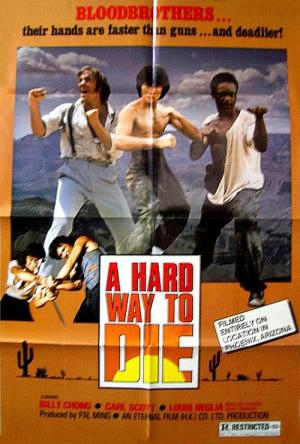 It’s one of those choppy movies where some of the storylines seem so separate you wonder if they’re two movies edited together. For a while it’s about the character played by Billy Chong (JADE CLAW, FISTFULL OF TALONS), who drifts into Arizona and finds an old friend (no idea who this is) working at a saloon. There are bare knuckle brawls that happen behind the saloon and he’s excited to take part, though his friend tells him he’ll get killed and those guys are criminals. (He does fine.)

Then after a whole bunch of that suddenly it’s about Tom’s family getting murdered and he’s injured and an old guy (must be Liang Hsiao-Sung , MANTIS FISTS AND TIGER CLAWS OF SHAOLIN, since IMDb says he plays “The Master”) heals him using “ancient Chinese method passed down for generations” which includes hitting him in pressure points and putting him in an herbal bath.

Tom says “If only I had known martial arts my mother and father would not have been murdered by gangsters!” and follows the Master around asking him to teach him kung fu. The Master absolutely refuses until suddenly for reasons I could not discern he says, “Tom, I will teach you.”

“Really?” asks Tom and it cuts right to him doing a bunch of fancy eagle claw moves and shit, with happy music playing.

I didn’t understand the reasoning behind the various fights that these two different main characters get into. One was against I believe a Chinese actor playing a Native American – he has two long braids and fights with a tomahawk. One of the best is a very long one in the bar – but during the day time while it’s totally empty. There’s lots of smashing through the bar and the walls. There’s one in a gravel pit with Tom beating up a whole mob of Chinese guys who call him the n-word. At the end he threatens to “put my foot up yo ass” next time they mess with him, and they run away.

This seems like a very shoddily put together movie, but it should be noted that the transfer on Prime is in the wrong aspect ratio and looks like it comes from a print that was run through the digestive tract of a rhinoceros. It’s dubbed, but not by the usual New Zealander voices, which is actually what I found most fun about the movie. The voice acting is much worse than usual, generally sounding like they found regular non-actors living in Arizona, had them read from a paper and didn’t do a second take. And there are some funny parts where they have to create a rowdy crowd sound and clearly just overlap a couple guys. During the bare knuckle boxing someone is whistling like the prisoners on the Pirates of the Caribbean ride trying to get the dog to bring them the keys.

But the voice of Tom is either the actual Carl Scott, or at least a young black man, stiffly reading awkward lines about “the Shao-leen Temple” and stuff. The older Chinese man who owns the saloon sounded like he was voiced by an older black man. I’ve definitely never seen casting like that before. I like it.

But the funniest one is one of the villains, a shaggy guy with sunglasses, sleeveless shirt and dogtags. Although this would not fit the time period, you assume from his look that he’s a Vietnam vet, now biker. But his voice is very effeminate. And not like a guy imitating an effeminate voice as a character. It sounds like that’s just the voice of the guy they hired to do it. And he’s the only one who tries to put some energy into his readings. The contrast of the look and the sound is a delight every time he yells at somebody.

Unfortunately he sort of disappears. Apparently the redneck guy Tom fights at the end is three time world kickboxing champion and Karate Hall of Famer Lou Neglia, now an MMA promoter. He’s also in the 1982 Fred Williamson/Jim Brown/Jim Kelly/Richard Roundtree movie ONE DOWN, TWO TO GO. If I understand correctly he was the leader of the guys who killed Tom’s family and is now living in his house. So Tom comes and sets it on fire and fights him to the death. At first Tom is losing, but Billy Chong takes over and then they work together.

As in SOUL BROTHERS OF KUNG FU, there’s something appealing about seeing a black American, particularly this young (but a little less skinny) man, doing this type of fighting we only see in this era of Hong Kong cinema, and therefore only by Chinese people. He’s good in the fights, his role is more central in this one, and he doesn’t get lynched at the end. But it’s so slapdash and poorly told it’s not like you can truly invest in the character or what happens to him. I wouldn’t say I exactly recommend this one, but the novelty of the international cast, American filming location and weird dubbing somewhat amused me.

Arizona Billy Chong Carl Scott Hua Shan Lou Neglia
This entry was posted on Thursday, June 11th, 2020 at 10:28 am and is filed under Action, Martial Arts, Reviews. You can follow any responses to this entry through the RSS 2.0 feed. You can skip to the end and leave a response. Pinging is currently not allowed.