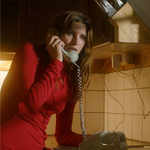 The accommodations turn out to be less than luxurious, and she’s not the kind of person who enjoys seeing farm animals slaughtered outside her window. As if that’s not bad enough, it quickly becomes clear that she’s surrounded by potential creepos. Whether they are just weird or worthy of fearing remains to be seen.

The best supporting character is Hans (Christer Cavallius), her awkward driver who turns out to be a fan and aspiring writer. I assumed he was making a DIE HARD joke when he said “you can call me Hans Bubi,” but all the plot summaries I’ve found seem to take that as his actual name. He inspires a good mix of sympathy and discomfort. Another idiotic man in Robin’s life is her very hip, kinda vulnerable, largely stupid and highly allergic boyfriend Teddy (Patrick von Barkenberg), who is supposed to be arriving to meet her soon, but we’ll see if that really happens – they said the same thing about the husband in LADY STAY DEAD. 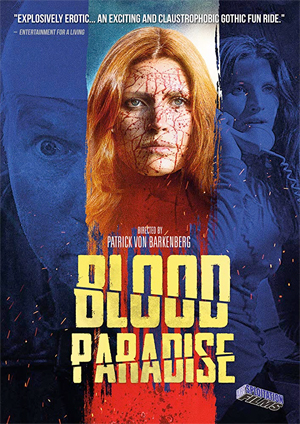 I guess it’s kind of shitty luck that they ended up making a vacation-to-Sweden-gone-wrong movie around the same time as MIDSOMMAR, and it’s not at all the same type of movie, so they can’t really market it like a mockbuster. Maybe this is a Scandinavia thing, but it reminded me tonally of IN ORDER OF DISAPPEARANCE, that Norwegian movie that was remade as COLD PURSUIT with Liam Neeson. Both have this deadpan chronicling of a set of quiet, reserved oddballs in a sparse landscape where people keep getting offed. And I suppose Hans’ whole goofy style and demeanor reminded me of that film’s villain The Count, though he’s a very different character who’s hard to fit into a category. At first he seems like he could be a minor character, just the driver who shows up late to pick her up in a small, regular car with a couch tied to the roof. But the movie starts to follow his home life, his fights with his wife about their cluttered home, his dream of being a writer, and his attraction to Robin.

It’s funny because his wife goes nuclear over completely innocent admiration for Robin’s books, but also Hans happens to be a pervy obsessed creep who steals articles of her clothing and stuff. I guess she just knows him better than we do.

I think the one thing that could put it over the top would be some real makeup FX work. There’s some blood and some death, but it’s the kind of stuff any nobody can put in their low budget movie. I think it needed something impressive to show it means business. Still, it’s got enough personality to it to get by.

For sure the movie’s greatest strength is in its lead. There are times when the seams show (for example some media coverage of Robin’s career doesn’t seem entirely authentic) but it’s still easy to accept Winter as this famous writer because she looks so larger than life – I’m sure you could mistake photos of her for the lead in an Italian film from the ‘60s or ‘70s – and has such a strong presence. It’s hard to imagine her not holding wine glasses and wearing expensive, fashionable, not-appropriate-for-a-farm clothes and shoes. As Hans’ wife says jealously, “She looks like a fucking model.”

After a little searching I figured out she did come to the U.S. to model, then called Andrea Wahlgren, before studying acting. I was surprised to discover that this is her first feature film, though she did several shorts. She also wrote BLOOD PARADISE, produced it, composed the score, designed the sets, supervised the costumes, did some additional photography and editing. (I guess it’s the kind of movie where you credit every little thing you did.) Von Barkenberg, who’s really funny as Teddy, is the director, and co-writer. And I can’t believe that Christer Cavallius has no other film credits at all. He’s a stage actor.

I hope we’ll see more from all of these people.

Andrea Winter Christer Cavallius Patrick von Barkenberg Sweden
This entry was posted on Thursday, December 5th, 2019 at 2:11 pm and is filed under Comedy/Laffs, Horror, Reviews. You can follow any responses to this entry through the RSS 2.0 feed. You can skip to the end and leave a response. Pinging is currently not allowed.