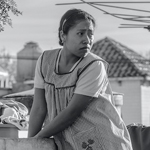 And it’s beautiful. Writer-director Alfonso Cuaron is known for groundbreaking cinematographical feats with director of photography Emanuel Lubezki, such as those thrilling long takes in CHILDREN OF MEN and GRAVITY. This time Lubezki couldn’t do it so Cuaron decided to be his own d.p., which he turns out to be very good at. Shot in a digital 65mm format, it’s a vivid widescreen black and white.

The story follows Cleo (Yalitza Aparicio, a pre-school teacher who hadn’t acted before), one of two women working for the family. They seem to have the routine down with the mother Sofia (Marina de Tavira) and the four kids, who are all constantly anticipating Dr. Antonio (Fernando Grediaga) coming home from his trip. When he does there’s a new tension – Cleo overhears a bit of an argument that made me, if not her, think he wanted to get rid of her. Or would object to how close the kids are with her. 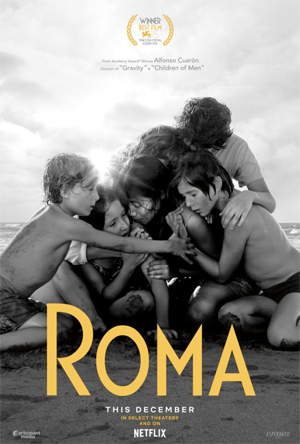 There’s alot of tension and suspense about all the dog shit in the courtyard. Early on I thought “Is that dog shit I’m seeing there?” And it becomes more obvious and plentiful, and people are always in danger of stepping in or driving over it. Though when it does happen it’s less of a big deal than I expected. Also, when she cleans it up you suddenly make the connection that the beautiful credits sequence of sudsy water washing over tiles was in fact her cleaning up dog shit.

Things are not going well between the husband and wife, a story we piece together from the little bits that Cleo witnesses – an angry phone call overheard from another room, the end of a hushed conversation with a friend at the hospital, a discomfort when telling the kids their dad is going on yet another business trip. Meanwhile, Cleo goes on a date with Fermin (Jorge Antonio Guerrero, Narcos: Mexico), who seems kind of blank and macho and… I do not approve of him. It must’ve been a hard part to cast: he has to be believable as a guy Cleo would like, but also as a cruel deadbeat, and he has to be willing and able to do a nude stickfighting scene. He’s almost comical in his self regard and because he wears a “Love Is…” t-shirt in two major scenes, but I felt so protective of Cleo that I couldn’t really laugh at him.

There’s a couple things like that – just on the edge of darkly funny. Like, okay, that’s almost funny, but I’m not in the mood. I did actually find a laugh in the midst of one of the most intense sequences. Cleo is (SPOILER) at the hospital going into labor and Dr. Antonio, who has (BIGGER SPOILER) abandoned the family at that point, sees her in an elevator and gives her a very supportive talk about being in good hands with these doctors and wishing her luck like he really cares about her, and he says he’s not allowed to go in with her… at which point her doctor tells him that he can come in if he wants. And he stands there looking dumb because he has no intention of being there with her. He really didn’t have to give her those words of comfort, but also he’s kind of full of shit and he’s been caught. It was the least he could do and that was all he was gonna do.

There’s definitely a sense that the men in this world are not cutting the mustard. From what we see it seems undeniable that Cleo is more of a parent to the kids than their dad is. She’s around them more, she talks to them more, she tucks them in at night, wakes them up, calls them her princess and her sweeties.

After seeing this I wondered what it would be like to have that kind of childhood where there’s a person in your life who’s that close to you, but who was basically a servant employed by your parents. And of course after reading about it I confirmed that that’s Cuaron, who says the movie is 90% based on his memories of childhood, and that he still has his Cleo in his life (the movie is dedicated to her). With that in mind it’s interesting how little Cuaron dwells on the kids’ feelings about what’s going on – it’s entirely in the perspective of Cleo. It’s about the strange situation of being both an employee and a family member. There is always an underlying class and cultural tension. She lives in separate quarters, she has to turn out the lights at night and use candles, she can’t exactly settle in to the family activities even if the kids want her to. I love the scene where they’re all watching TV together, laughing, and Cleo is catching parts of it while serving them drinks, smiling, trying to follow what’s going on, and she lingers and kneels down and one of the kids puts an arm around her and here she is, part of the family… until she’s sent to do some task and snaps out of it.

I like that it shows how her life is worthy of the epic 65mm treatment, even without some bullshit plot where she marries a prince or gets a makeover to get rich or ascends Jupiter or whatever most movies about maids use as a hook. Instead we watch her quietly struggle to maintain the order of this family and live her life in the vicinity of uncontrollable forces: an earthquake, a forest fire, a deadly riot, the dissolution of a marriage, life and death.

This is a Netflix release, and I’m sure it’s still great on a TV, but thankfully they’ve been playing it in some theaters. More than OKJA for sure. I’m grateful to have seen it at Cinerama, especially for their Dolby Atmos sound, because the movie really uses the sounds that surround you to put you in this world, especially in the really stressful scenes like when they go into the city and some of the kids get away from her. So much traffic and so many people and she’s too short to see over them. It’s even more powerful in a scene that takes place in a hospital during riots. You focus on her medical needs, but you’re constantly aware of other emergencies going on all around her and outside of the frame. It doesn’t help that Grandma Teresa (Veronica Garcia), usually so calm and reserved, is starting to lose her cool.

There’s a particularly harrowing and devastating scene that I believe uses a long take, but I was too wrapped up in what was happening to be sure about that. You’ll know the scene I’m talking about, but it’s not even the one that got the tears out of me. There’s another terrifying scene, a danger too small to usually be the climax of a movie, but made into a scene of suspense that had me sinking down in my seat in fear of what would happen. This movie had me by the whatsits.

“This movie had me by the whatsits.” –Vern, outlawvern.com

Alfonso Cuaron B&W Mexico Netflix Yalitza Aparicio
This entry was posted on Thursday, December 27th, 2018 at 9:39 am and is filed under Drama, Reviews. You can follow any responses to this entry through the RSS 2.0 feed. You can skip to the end and leave a response. Pinging is currently not allowed.