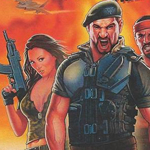 You guys know my friend david j. moore, right? He did those NINJA II on-set interviews for us back in 2013, and he’s the author of the awesome coffee table book World Gone Wild: A Survivor’s Guide to Post-Apocalyptic Movies, which I had the honor of writing the introduction to.

Well, back when he first contacted me about that he told me about this next book he was working on, and I’m not sure there will ever be another book more up my alley. THE GOOD, THE TOUGH & THE DEADLY: Action Movie Stars 1960s-Present is his upcoming opus about “every action star who’s crossed over from the world of martial arts, sports, professional wrestling, and stunt work.” We’re talking a big, beautiful 560 page hardcover book with photos and everything between over 1,000 action movies reviews, a few of them contributed by yours truly (me [Vern]), plus some by Zack Carlson and Mike McPadden. If it’s anything like World Gone Wild I’ll have an ever-growing must-see list folded up inside it as a bookmark.

But I’m more excited for david’s interviews with 70+ action stars and filmmakers. He’s mentioned to me who some of them are, and basically it’s most of the people we talk about here. Yes, big famous people, but also the lesser knowns who in my opinion are more interesting and important to hear from. david’s got encyclopedic (is it wikipedic now?) action knowledge, especially the DTV and the ’80s and ’90s sub-Van-Damme type stuff that most fascinates me. On the rare occasions when I tell him one he doesn’t know I feel like I should get a medal or something.

And by the way, you can’t judge a book by its cover, but you can assume this one really gets it because it knew it was important to have helicopters and ninjas in the background.

The book will be available December 28th, but you can pre-order it right now. What, are you gonna decide between now and then that this is not a book for you? I doubt that very much.

This entry was posted on Wednesday, July 22nd, 2015 at 8:53 am and is filed under Blog Post (short for weblog). You can follow any responses to this entry through the RSS 2.0 feed. You can skip to the end and leave a response. Pinging is currently not allowed.