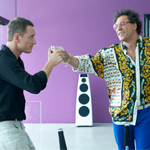 But from my limited experience THE COUNSELOR, the Ridley Scott movie made from McCarthy’s first original screenplay, is sure recognizable as his work. It’s a crime story full of colorful characters and the occasional brutal violence, but it’s not interested in a straightforward approach to storytelling. I mean, it’s never as aggressively untraditional as that one really abrupt thing that happens toward the end of No Country (I had to flip back a few pages after that one ’cause I thought I missed something), but it takes it’s sweet ass time getting to a point where you even know what it’s about on the surface.

We never find out the main character’s name, but he’s played by Michael Fassbender, and everybody who addresses him addresses him as “Counselor.” The opening scene is all about how good he is at going down on his lady (Penelope Cruz). It’s the first movie I’ve seen start that way since AWAY WE GO, possibly including porn. After that we meet the crazily dressed Javier Bardem and Cameron Diaz out in the desert, having some drinks and watching their pet cheetahs run around. Bardem wears loud shirts, yellow tinted glasses and Sid Vicious hair, as if it was important to someone to give him a sillier look than he had in NO COUNTRY. Diaz has cheetah spots tattooed up her shoulder. My first guess was that he was a famous photographer and she was a model and they were doing a themed shoot out there. Wrong. This is just how they lounge. 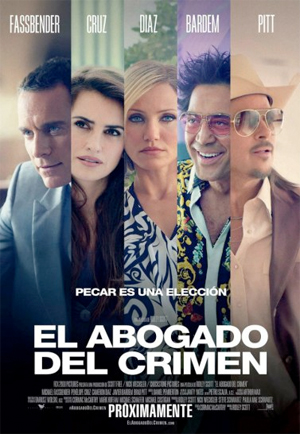 The characters  go about various activities, each scene not necessarily related to the last. It’s a bit before it’s stated that the counselor and Bardem are involved in crime together, a while before they specify what type of crime, and they never get to showing exactly how they do it. They’re just involved, and it’s the point of view of the movie (and several of its characters) that that’s enough. If you’re involved you’re eventually gonna be dead.

Near the beginning Bardem describes a horrible weapon called a bolito that slowly, inescapably cuts your head off, and that’s what happens to the counselor metaphorically. (SORT OF SPOILER: from the time he mentioned the bolito I was dreading when it would eventually be used, but also dreading how disappointing it would be if it wasn’t. Well, both sides were satisfied. You see one, and you see it more explicitly than I expected. Yeah, he was right, those things are no fun.)

There’s a whole lot of story-telling and philosophizing in this movie. You gotta accept that. Talk talk talk. Even the jeweler who the counselor buys an engagement ring from philosophizes about the meaning of diamonds. Shit, even a guy that kicks him out of a restaurant after it’s closed stops to philosophize about life and death. Brad Pitt as… a cowboy guy that gives him advice or something, he tells alot of parables. I think it was him that brought up the topic of snuff movies, and the idea that the person who watches it is an accomplice. This is probly the main theme of the movie. This counselor thinks he can be at a distance and profit off this business without being truly guilty, as long as he doesn’t let himself know the gory details. But that cannot work. He will eventually become one of the gory details. And then some other sap is introduced at the end, The Banker, bright eyed and humorous and probly doesn’t know about bolitos yet.

(I hope one of those people who calls the great Coke scene in THE ROAD product placement calls this circular ending a blatant sequel set up.)

Ironically the turn of events that seals the counselor’s doom has nothing to do with his criminal ways. In fact he does a nice favor for a completely unrelated, court-appointed client (Rosie Perez – good to see her in a movie again) that connects him to some bad shit he honestly has nothing to do with. But as everybody keeps telling him in different fancy ways, tough shit.

In a sense this reminds me of George V. Higgins, or a couple of Tarantino’s movies, because so much of it is just about conversations and ideas people bring up, and alot of the story comes out of that more than a traditional plot structure. There’s alot of phone calls and meetings in hotel cafes. And there are lots of little tangents, characters that show up for a little bit and catch your interest and then are not seen again, or get horribly killed so you know for sure you’re not gonna see them again. Almost all of them do alot of gabbing. Everything is over-discussed and under-explained, that’s the approach.

But most of my favorite parts of the movie are the parts without talking, the parts just about the process of doing something odd: setting up a wire to decapitate a motorcyclist, repairing a truck with bullet holes, trying to figure out what a device they found in a dead guy’s helmet does. It’s not that often that the shit goes down, but when it does it’s always thrilling.

I heard that some people have said Diaz is terrible in this. I think what some of them mean is she’s really convincing as a strange character that makes them uncomfortable. She’s a little like Kristin Scott Thomas in ONLY GOD FORGIVES, a trashy Real Housewife/crime kingpin hybrid. But she’s more aggressively, weirdly sexual, to the point of trying to harass an innocent priest by making him hear about her sins without expectations of forgiveness. I don’t know what the fuck is up with the cheetahs, and I like that I don’t know what’s up. It’s like that zebra in SHADOWBOXER. Diaz looks older and more worn than she actually is, and her usual giggly persona completely disappears behind cold, hateful eyes.

I love that they have these pet cheetahs around all the time and nobody seems to be scared or surprised by them. They’re sitting there at the pool party, at the club. Bardem’s (SPOILER) last scene is so fitting. He’s not even supposed to get killed, but some dumbass shoots him, and like in an old western some little kids immediately run over and steal stuff off the body. In death he’s stripped of all his flashy shit – watch, shoes, sunglasses. But also his cheetahs get loose. That’s his legacy, I guess.

For me the first chunk required some patience. It’s like I’m staring at a bunch of puzzle pieces and it takes a little too long for me to find any that fit together. Then, right around the scene where Bardem recounts a story about a mildly Cronenbergian sex act, the movie reveals its sense of humor and starts really rolling from that point on. I liked ONLY GOD FORGIVES considerably more, but THE COUNSELOR had a similar effect on me: I can understand why normal people would hate this, but I enjoyed it, and the more I thought and wrote about it the better it started to seem.

Well, apparently alot of people do hate this one. After loving THE LONE RANGER and thinking AFTER EARTH was okay and now this, I’m starting to feel like my job this year is pre-writing the rebuttals to the “worst of the year” lists everybody’s gonna write. But I swear I’m not some contrarian (or reverse contrarian?). I guess I must be looking for and/or appreciating qualities in movies that most other people aren’t up for. But I also feel like in most of these cases there is some pre-judging and unfairness involved. To me this seems like one of those cases where even if you don’t like watching it you can acknowledge that it was intentionally made in a certain way that is interesting, that you can see why somebody would appreciate it. Like, that’s how I feel about CLOUD ATLAS. Something can be very, very not for you without being the worst thing in the world.

There was a review-ish thing by Andrew O’Hehir on Salon that got some attention for calling THE COUNSELOR “the worst movie ever made” in the headline, comparing it (unfavorably) to ISHTAR, and aggressively pushing a parallel to BONFIRE OF THE VANITIES. Tom C. kindly sent me the link because he thought the piece was spot-on, but I didn’t read it until writing a draft of my review here.

Obviously I disagree with O’Hehir’s stance. His piece is mostly a series of quips about just how bad it supposedly is (“It’s like a mumblecore movie about a bunch of Sarah Lawrence philosophy majors, made by coked-up rich people for 100 bajillion dollars”) with a few descriptions of unusual things about the movie, making the incorrect assumption that only an asshole would want to see unusual things in movies. Yes, the characters talk around things, yes, a woman fucks a car, yes Bardem has a hilarious reaction to that sight, yes the cinematography is great. These are good things in my book.

O’Hehir condescendingly writes, “I suppose it’s dimly possible that Scott and McCarthy have deliberately crafted a movie that looks like a mainstream entertainment but is in fact some work of deliberately unsatisfying postmodern gamesmanship. But it’s not likely.” I’d say it’s nothing that complicated, it’s as simple as they knew if they made a movie that “looks like a mainstream entertainment” on a poster then they could make the type of movie they actually wanted to make. They know that there’s room in the world for a movie that’s about a doomed cog in the drug trade, that avoids certain specifics and storytelling expectations, and is more about a bunch of big actors getting to play colorful characters who talk alot than about anything actually happening.

And I’m glad they knew it. I wouldn’t want all movies to be like this, but having one of ’em is great.

Brad Pitt Cameron Diaz Cormac McCarthy Dean Norris Javier Bardem John Leguizamo Michael Fassbender Penelope Cruz Ridley Scott Rosie Perez
This entry was posted on Tuesday, November 5th, 2013 at 2:58 am and is filed under Crime, Reviews. You can follow any responses to this entry through the RSS 2.0 feed. You can skip to the end and leave a response. Pinging is currently not allowed.

41 Responses to “The Counselor”