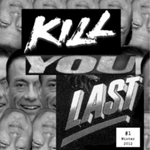 I was proud to do another piece for the Village Voice this week, but that’s not the only place I’m in print. I also got interviewed for a new zine called Kill You Last, which is all about action movies. Check out the logo there. Can anyone tell me where the ‘YOU’ comes from? I know the other two.

I never got interviewed by a zine before – also, I didn’t know that people still made them – but this guy Wil explained to me what he wanted to do and I knew it was up my alley. He writes passionately about action movie topics such as going to the EXPENDABLES 2 premiere, mediocre Bruce Willis movies, ’80s VHS covers, some asshole that wrote a book about Seagal, etc. I haven’t read the whole thing yet, and I strongly disagree with his take on HAYWIRE, but I like what he’s doing. The best topic in there is an interview with somebody who’s working on a documentary called CHUCK NORRIS VS. COMMUNISM about an underground network that smuggled bootlegs of American action movies into communist Romania.

Here’s where to get KILL YOU LAST

zines
This entry was posted on Thursday, January 3rd, 2013 at 11:41 pm and is filed under Blog Post (short for weblog). You can follow any responses to this entry through the RSS 2.0 feed. You can skip to the end and leave a response. Pinging is currently not allowed.