It was hard for the fringe icons of the ’70s to recapture the magic even in the ’80s or ’90s. There was that SUPERFLY RETURNS movie with a different actor playing Priest for the hip hop age. There was the last Curtis Mayfield album with beautiful songs interrupted by terrible rapping, there were pretty good George Clinton albums trying a little too hard to cram in guest appearances by Ice Cube, there were attempts to remake DOLEMITE as a studio movie starring LL Cool J. Always trying to use what’s popular at that moment to try to legitimize the O.G. shit for the kids. Sometimes it’s okay, but it’s never a home run. It’s never devastatin. 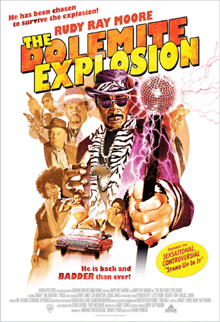 THE DOLEMITE EXPLOSION is completely free of that kind of self-consciousness. It’s exactly the same strutting, obscene, scrappy nutball shit that Dolemite always did, except done when he was in his 70s, which makes his mythic asskicking powers and irresistibility to women even funnier. The movie premiered in 2007 but looks way older than that (IMDb says 2002, but they also list a different director than the credits do). It’s shot on film (you can even see the cigarette burns) and Rudy seems able to walk just fine (when I saw him live on his 80th birthday he was in an electric wheelchair because he broke his hip).

The only non-Dolemite movie I can compare this to is RETURN TO SLEEPAWAY CAMP, because both are nostalgic revisits made by filmatists who seem to have been able to live the intervening decades in a bubble protected from self-consciousness and mainstream Hollywood. It’s a condescending term, but I don’t know a better way to put it: these movies are outsider art. These artists just make movies the way they want to, the way they know how, and you can’t really tell if they know how weird their creations are.

When our story begins, “the thugs and cutthroats” (as Dolemite calls punks and creeps) are going around committing a series of quick-cut massacres. In cases like this you need Dolemite to come home and clean up the neighborhood, so his sister Jaz (Jedda Jones) calls him at his home in Africa (is this a direct followup to SHAOLIN DOLEMITE?) and he agrees to come in with his two sons and save everybody. No specific African countries or regions are ever mentioned, just “Africa.”

Before Dolemite even gets out of the car on the way home from the airport he sees some thugs robbing a preacher, so he demonstrates the “mystical powers” he picked up in Africa: he can shoot electricity from his fingers. “Wh-wh-what’s goin’ on?” one of the hoods asks.

“ASK MARVIN GAYE, MOTHERFUCKER!” Dolemite says, although it doesn’t seem like he kills the guy, which takes away some of the line’s impact.

For this entire scene we never see Dolemite get out of the car, we just see closeups of his mouth, introducing the movie’s it’s-the-best-we-could-manage-in-the-editing-room style. There will also be alot of scenes with obvious dubbing, but unlike in Seagal’s movies it’s always Rudy Ray’s own voice. My favorite dubbing incident is at the end of the scene where Dolemite gets the key to the city. They dub in a line of him thanking “the lovely D.A.” for being at the event, even though he already did that earlier in the scene. I guess he just wanted to emphasize it.

In DOLEMITE he got out of prison and was harassed by white cops, in THE HUMAN TORNADO he fucked the white sheriff’s wife, but in this one a white mayor literally gives him the key to the city. Otherwise things haven’t changed that much. He’s in conflict with the late Willie Green’s brother Almo Green (played by Rudy Ray Moore regular Jimmy Lynch), who controls the crime and a Dolemite’s Total Experience type night club. Lieutenant Blakely is still on the case (still played by Jerry Jones, still the screenwriter as with the other two Dolemite pictures). That asshole Mr. White (David Ward) is still around. Dolemite still rides in a limo and still is associated with an army of kung fu girls. Queen Bee’s not around though so they’re trained by Dolemite’s sister. There’s a handwritten sign that says:

Dolemite gives them inspirational kung fu demonstrations and tries to make them drink his “voodoo juice” that will give them the power to teleport. But they don’t ever use it.

The plot seems pieced together after the fact, but it involves Almo Green having his thugs kidnap Dolemite, then Jaz, then having a kung fu competition in a park somewhere, then asking the Bishop Don Magic Juan (playing himself) to have Dolemite killed, then Dolemite fights a guy called Black Chin Ho (“boy, if you see him, he make a rotweiller bow down!”) played by director Ron Hall. There’s not much of a build to a conclusion, and it has the most random final line/title explanation you’re gonna see. It’s great.

Dolemite has alot of good lines in this one, and this is probly very high in the rankings for Movies With Most Uses of the Word ‘Motherfucker.’ He doesn’t perform any toasts (except in a deleted scene at a backyard party) but he has some good rhymes, like, “You tell Almo Green every time there’s a fight I’m gonna win it. I’ll fuck up a motherfucker ever 15 minutes. WOO-WOOF!” He has the greatest voice for yelling out stupid shit and making it sound awesome.

Obviously Rudy Ray was a comedian, and alot of this stuff is joking around. He’s gotta know it’s funny when he defeats Black Chin Ho by throwing a handful of rubber snakes at him. But like the original DOLEMITE it’s made much weirder by also seeming kind of serious at times. I think it’s really supposed to be dramatic when he’s been kidnapped and Jaz is crying “They got my brother! They got my brother!” Or when he tells his nieces that “I came back to see that young ladies like you all will be able to walk the streets in peace” and they beg Uncle Dolemite to promise that he’ll come back safe.

And Dolemite is just funny because of the cocky shit he does. He slaps a guy that’s pointing a machine gun at him. He demands that his kidnappers bring him food, then when they offer a hamburger demands a steak sandwich. During the last fight he yells “Take THAT, motherfucker!” two different times. He’s obsessed with telling people to “bow down,” and uses magic to turn a guy into a “bitch” when he refuses.

The funny part of the original DOLEMITE is the slow, awkward kung fu. In the years since Rudy Ray made friends with real martial artists (like the guys that made SHAOLIN DOLEMITE, a movie that’s not in the box set for some reason) so in this one he uses stunt doubles so at least the moves are more real.

Part of the appeal of the original DOLEMITE is that it’s a time capsule of outrageous fashion. But he’s got some good looks in this one too. He’s got some of these Jim Brown type “I grew up, got serious and learned about Africa” type of looks: 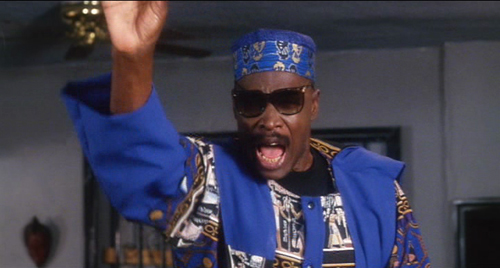 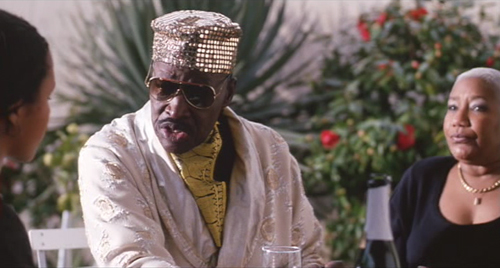 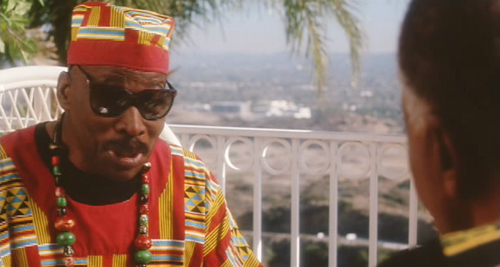 But sometimes he puts on hats that look more like the Dolemite we remember: 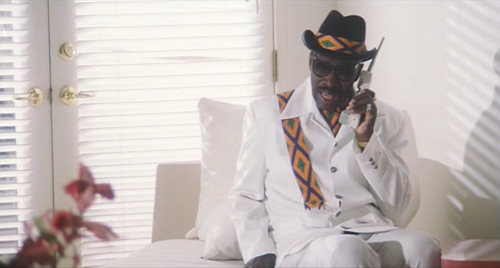 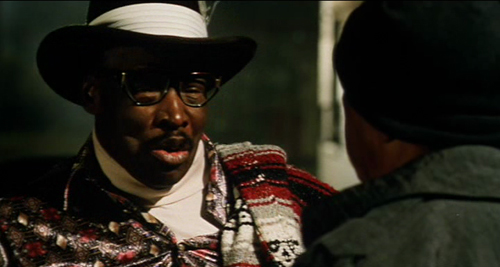 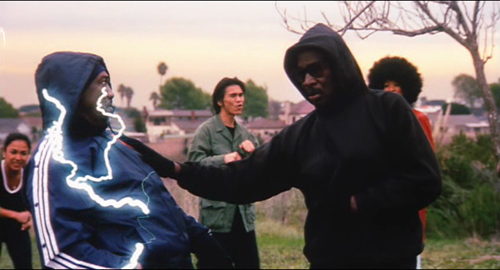 (Ignore the electricity. That’s a different issue.) I mean I’m glad he can wear something more comfortable every once in a while. But it’s obvious any time these old guys wear hoodies that they’re gonna start doing some cartwheels or some flying kicks.

By my count Dolemite has 6 (six) sex partners in the movie:

#1-2: Two regular looking women he sees on the side of the road, charms with his “I have a PHD – pretty hard dick” line and they immediately do him (actually, a butt double I think) in the back of the car

#5: A masseuse with giant fake boobs. She also uses one of the Dolemite backscratchers he sold at his shows. (I have an autographed one. I never use it.)

#6: a plus-sized lady he doggystyles during the end credits

Almo Green is also a really funny character, and not in an obvious, jokey kind of way. I like him because other than his fancy pimp suits he doesn’t seem that convincing as a kingpin. His club Charlie Blue’s looks like a medium-sized Mexican restaraunt. In his office he has a Malcolm X poster and one that says “The Art of Dance.” He’s kind of sensitive, so when Dolemite escapes confinement and confronts him on stage at the club, Almo says “You ruined everything, motherfucker!”

When he calls in Don Magic Juan and some big scary guy he makes this great speech:

“I got a big problem, and after 25 years he’s back. Yesterday, in front of all my people, he embarrassed me. He knows all kinda shit. Trick shit. Karate. Like a cat, he got nine lives. I want him dead. I want him dead, dead, DEAD!” A little later he says, sweetly, “It’s good you guys came.”

I’m glad this movie is finally out there. It stands as a testament to Moore’s life – he never really wanted to grow up, or grow out of it, or get mad that he never made it to the mainstream. He just kept doing what he always did, the way he wanted to do it, and he still did it well. I think all Dolemite fans will enjoy this movie, unless they were expecting 75 year old Rudy Ray Moore to come make the UNFORGIVEN of Dolemite movies.

Anyway, if this trailer makes you laugh then the movie will too.

blaxploitation Rudy Ray Moore
This entry was posted on Tuesday, April 10th, 2012 at 12:46 pm and is filed under Action, Comedy/Laffs, Reviews. You can follow any responses to this entry through the RSS 2.0 feed. You can skip to the end and leave a response. Pinging is currently not allowed.

19 Responses to “The Dolemite Explosion”