Hey everybody: explain to me what I’m missing about KILL LIST

I’ve been hearing about this genre-smooshing British crime thriller for a while now. Mostly from Paul, but it’s gotten great reviews all over the place. I did the right thing and didn’t read anything about it or watch a trailer or even know what the other movie by the same director is about. I just waited until I could rent an import DVD of it and check it out.

As you can tell by the title of this post I wasn’t too impressed. Didn’t hate it or anything, but honestly can’t understand why so many people are excited about it. This puts me in a hard position as a reviewer with a vow of excellence because

1) I can’t really get into the plot or even the genre without giving away twists that other people seem to like
2) I don’t want to come off like some dick trying to prove he’s above it all by being ho-hum about a movie other people think is amazing
3) I don’t feel like I have any real blinding insights into the movie, or even strong reactions to what I liked or didn’t like in it
4) To be honest I kinda forgot most of it shortly after viewing

4b) admitting that makes me guilty of #2

So my original plan was to take the coward’s way out and not review it at all, but people keep contacting me in email and comments to recommending it to me and I know that’ll continue for a while so I figured I might as well address it. This is not really a review, but a spoiler-laden fact-finding inquiry type deal where you can help me understand why you all love this thing and I don’t. 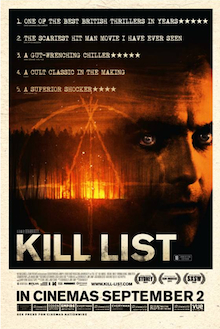 What I loved about KILL LIST: that it brings joy into your lives. I care about you guys. Other than that nothing comes to mind.

What I liked about it: the slow start and gradually dropped clues are pretty cool. I think the cover of the DVD already told me it had to do with hitmen, so there’s no surprise there, but I still respect the way it sort of pretends to be a family drama before revealing what the guy’s line of work is. It’s all shot and acted in a very plain sort of way in a bland looking setting, nobody is really cool looking or anything so it has kind of a raw, real world feel. In that sense it kind of reminded me of that Paddy Considine revenge movie DEAD MAN’S SHOES, although I liked that one a little better I think.

I like that it takes time for characters, like when they’re having dinner and that one bitch is talking about firing people, and you compare it to these guys that obviously shoot people for a living. And they seem to have a real friendship, the other guy trying to look out for the main guy. The marriage trouble is treated more seriously than in many genre films. They seem to be ready to kill each other and then after some wine and a night with some friends they’re laughing and cuddling. Very true to life.

I sort of liked the random craziness of the guy cooking and eating something that his cat killed and left in the yard, but then when you realize that he had to eat it as part of the cult ritual the scene becomes completely ludicrous. I mean, they got real fuckin lucky that he happened to do that completely out-of-the-blue unpredictable thing, let’s put it that way.

I always enjoy a good killers-planning-their-hits yarn, but KILL LIST is not exactly putting in a strong effort in that department. I prefer more elaborate plans and preparations and more exciting set-piece type assassinations like in THE MECHANIC (Bronson), HIT!, MUNICH, even KILLER ELITE (Statham). Maybe that was the point, to make the murders not glamourous, but come on man. Killing is bad. This is not new information to me. Don’t give me this Gladiator “ARE YOU ENTERTAINED?” shit, ’cause the answer is “No, not that much.” You can do better.

The big twist in the movie is that their mysterious employer is actually a cult, but it’s not like a big gasp! type revelation because they’ve been hinting at it since near the beginning when whatsername carved an occult symbol into the back of the dude’s mirror. I guess I respect their dedication to a weird concept but personally I didn’t think it was a cool idea at all. Yeah, sure, it’s like THE WICKER MAN, but THE WICKER MAN created a whole world on that island, a weird vibe with all these people and their music and dances and Christopher Lee and the way they treat this uptight virgin as they slowly circle in for the kill. You can’t get the same effect just by having some assholes in robes walk around with some torches. They come off as standard issue satanists, it’s not as creepy.

Is it a cultural difference? Is there something in Britain’s religious background where you actually do fear pagans? Or is it just a reference to THE WICKER MAN because THE WICKER MAN is a cool movie? I don’t really know. Or maybe it’s just me, that I don’t fear pagans. Scary-cult movies (like ghost and possession movies) have never really been a favorite subgenre for me. Those aren’t things my psyche knows how to get too worked up about. It prefers the honest scare of a sharp object coming at me, I guess.

I like timely political themes in horror movies and they’re definitely doing that here. The protagonists are Afghanistan veterans, that seems to have messed them up, both making them violent and making them want to sit around the house all day doing nothing. The economy is fucked up and that’s why they need to murder people. I heard that some people who love it see it as some kind of commentary about British foreign policy, but I guess I didn’t pick up on whatever it’s saying about that.

It’s kind of a puzzle movie, there are lots of unexplained things that probly fit in if you go back and watch it again, but I didn’t really enjoy the initial viewing enough to want to go back and sit through it again to look for those things.

Sorry man, I’m trying to list the things I liked, but I kind of feel like I read a buddy’s only-okay essay and I’m trying extra hard to come up with compliments. I’ve heard this is a real love it or hate it movie, but I can’t figure out why anybody would bother to do either one. I’m gonna become a middletarian, which is like a contrarian but only on movies people say are “love it or hate it” and only by not loving or hating it.

What am I missing?

This entry was posted on Wednesday, February 15th, 2012 at 11:45 pm and is filed under Blog Post (short for weblog). You can follow any responses to this entry through the RSS 2.0 feed. You can skip to the end and leave a response. Pinging is currently not allowed.

60 Responses to “Hey everybody: explain to me what I’m missing about KILL LIST”