THE BLACK POWER MIXTAPE 1967-1975 is an unusual documentary. The title means that the footage wasn’t made as part of one movie, it’s a collection of short pieces covering stories of the American civil rights movement, put together and recontextualized a little with voiceovers by activists (Angela Davis), poets (Abiodun Oyewole from the Last Poets) and musicians (Talib Kweli, Erykah Badu) talking about what they’re seeing. There’s coverage of Stokely Carmichael, young Nation of Islam spokesman Louis Farrakhan talking about his church, the Attica riots, Angela Davis in jail (wearing a red turtleneck) telling about the terror of racist bombings during her childhood to chastise an interviewer for asking her if she believes in violence.

Here’s the kicker: it’s all shot by Swedes. Swedes are killing us with vampire movies, mystery thrillers and now documenting the history of our own civil rights movement. It goes without saying that we’re gonna find an overqualified American director to slickly remake the shit out of this one. Then it’ll be your move again, Sweden. 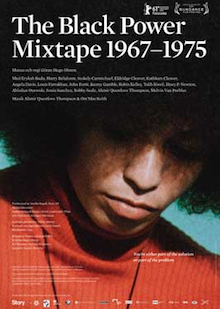 Swedish news crews and documentarians came to the states to cover an interesting story. Not being a part of our history these people had a much different perspective and didn’t follow the same rules as American media about what they were supposed to show or who they were supposed to sympathize with. They could be outraged by the massacre at Attica, they could show Carmichael on a couch with his mom or signing books for lines of admiring white people in Stockholm. The difference in perspective actually becomes a topic in a segment about the editor of TV Guide visiting Sweden and deciding their coverage of U.S. news is anti-American. He says in the U.S. we can cover the bad stuff because we live here and know the context of the good things that happen here. He never says if he’s also against American news covering bad things that happen in the rest of the world. He also never says what happens this week on Marcus Welby M.D. or what time it’s on which is all I personally wanna hear out of this individual. Get back to work, fella.

It’s kind of sad that the commentators from our own era always end up being rappers, it seems like there should be a wider variety of black thinkers that get to do this type of stuff. But then again, I honestly believe hip hop has been a major force in changing racism in this country. As recently as the ’80s and early ’90s the mainstream media was fucking terrified of black culture. Magazines and newspapers constantly did pieces on the threat of rap music. They thought DO THE RIGHT THING was gonna cause riots. MALCOLM X was incredibly controversial when it was in theaters, now it’s new on blu-ray and it’s about as explosive as QUIZ SHOW or something. (but a great movie.)

I think England was kind of like the Swedes for some of the hip hop. Public Enemy was blowing up there before here, that’s why they got those live clips form London on It Takes a Nation of Millions To Hold Us Back. Their music was demonized just like some of the leaders shown in this movie, now they’re oldies. There’s a couple generations that grew up on hip hop. It can’t be dangerous anymore, it dominates pop culture. It’s Phil Collins and Huey Lewis & the News.

To my ears most of the music has devolved, but its prevalence has caused undeniable cultural advances. It’s hard to make white kids afraid of all black people when they grew up watching reality shows about Snoop Dogg coaching peewee football. There’s still plenty of racism, but it’s different. And I really believe some of it will die off with the old fuckers who still practice it.

Whether or not all that justifies having more rappers on here than academics I think it’s okay because they chose them well. Kweli has some good observations about the footage and makes some personal connections without ever seeming pretentious or full of himself. He even has a story about being questioned at an airport for having a recording of a Stokely Carmichael speech.

It’s also not the typical type of commentary you expect. For example Oyewole keeps off-handedly mentioning not agreeing with Martin Luther King. So there are some interesting viewpoints. At this time I would like to show off my vast breadth of knowledge by telling you that not only did I know Abiodun Oyewole by the sound of his voice, I think I also know how to pronounce his name: abby oh dune oy uh whoah lay. That’s right. Off the top of my head. Boom.

With the “mix tape” format – and also with straightforward  on-screen text – the movie announces that it’s not trying to be a definitive statement about the black power movement, it’s just an idiosyncratic* selection of deep cuts to put you in a mood. Little bit of Malcolm X speaking, some kids playing with the fire hydrants, some people on the street talking, an interview with the owner of a black book store.

Fair warning though: this is not the party mix. It’s kind of a bummer. There’s a part where some time after the assassinations of Dr. King and RFK they ask people on the streets about “the future,” and one black woman says very matter of factly that she doesn’t believe there is any future for the country. I couldn’t help but think back to the white diner owner in the opening who talked about how great things were in his part of America, and wonder if he still felt that way at this point, or if he knew other people felt that disillusioned and hopeless.

It’s interesting to look at from a 2011 perspective. I always sympathize with black militants, even ones that would call me a white devil. If you can’t handle an occasional “white devil” just imagine how bad a time you would’ve had being called all the worse names they got called back then. You’d never cut the mustard. But watching this I think enough time has passed that I can be a little embarrassed by some of the things they say, the way I am with my fellow leftists at war protests, or some well-meaning hippie that’s not hurting anybody but maybe says some corny shit. They tend to go a little over-the-top in their language and maybe hurt their point a little bit. Angela Davis is speaking to the world but she sounds just like activists today who are mostly speaking to a college campus or a protest somewhere. She tries to be constantly confrontational even in her choice of words, instead of trying to communicate and talk some sense into some dumb motherfuckers.

But she’s also right. This is a really good time capsule. I definitely recommend it for all Americans and Swedes interested in these issues. Thank you Sweden.

* yeah, I know that word, motherfuckers. And I’m willing to use it.

Angela Davis Black Power movement Erykah Badu Last Poets Talib Kweli
This entry was posted on Friday, February 10th, 2012 at 12:01 pm and is filed under Documentary, Reviews. You can follow any responses to this entry through the RSS 2.0 feed. You can skip to the end and leave a response. Pinging is currently not allowed.