Holy shit! There’s another good werewolf movie! And it’s from the ’90s. This is not really one of my favorite subgenres, but there’s definitely a couple good ones of this type. Obviously AN AMERICAN WEREWOLF IN LONDON is one of the greatest horror movies of all time and still the most perfect specimen of the scary/funny balance. Then I like THE HOWLING 1&3 and GINGER SNAPS is pretty good with decent sequels by DTV standards (even if they were theatrical in Canada). And DOG SOLDIERS I remember enjoying. The end.

But now I’m happy to add BAD MOON on there too. From writer/director Eric Red (after he wrote THE HITCHER but before he flipped out and crashed his car into a bar killing 2 people), this is a story about a woman, her son, her dog, and her brother who she doesn’t know is a werewolf. It’s primarily just those characters and mostly confined to their house, yard and nearby woods, but it doesn’t feel small or cheap. Just intimate.

But it starts on an expedition in Nepal, where Ted (Michael Paré) and Marjorie (Johanna Lebovitz) have a run-in with a (in my opinion you know where this sentence is going)  werewolf. It’s a vicious fuckin beast, and Ted manages to shoot its head off (great effect) but not before it kills his girlfriend and bites him. So he’s got some rough days ahead.

Then we pick up months later at Janet (Mariel Hemingway)’s home. She’s a lawyer and single mother of Brett (Mason Gamble – one-time holder of the coveted Dennis the Menace mantle and little sidekick in RUSHMORE). They’re excited to get a call from Uncle Ted to come visit him in his trailer out in a national park or somewhere. He’s the cool uncle and the cool brother who’s manly and smokes and is one with nature and shit. They don’t get to see him enough because he’s always traveling around the world having adventures or, in this case, isolating himself while he tries to figure out if it’s possible to cure werewolfism. He has to do it himself because he’s probly a freelancer and doesn’t have health insurance. 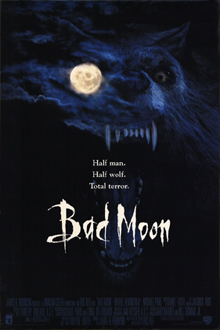 Ted is a tragic figure. He lost his girlfriend and has to pretend like they just broke up. He doesn’t know what the fuck to do. And it turns out being a werewolf is even worse than we’ve heard – in this movie they turn wolf every night, not just on a full moon. So he has to rush Janet and Brett away as it’s getting dark and then go chain himself to a tree. (I’m not sure how he gets out of the chains in the morning, that part is not explained. Maybe he has the key on him the whole time but werewolves don’t know how to use keys.)

Well, the self-leashing method has some security holes, he ends up eating a guy. When the body is found the authorities assume it’s an animal attack, but he’s still panicked so in desperation he accepts Janet’s offer to go park his trailer in her yard for a while. He has this theory that family love maybe cures wolfthropy. Who knows?

So the movie is about what happens as he’s living there, trying to hide why he goes out into the woods at night, trying to restrain himself from eating everybody. And little Brett is suspicious and finding clues, and Janet is worried about him and trying to be a good sister, and this is all very dramatic. But what makes it great is that the main tension is between Ted and Thor, the family’s beloved German Shepherd. Because of his Canine-American heritage Thor is able to sense what’s going on here. He has dogdar. He doesn’t have to sneak around in the trailer and find a book about werewolves to get suspicious about Ted, he just smells it or hears it or something.

Thor is actually the title of the book the movie is adapted from, it’s written by an author named Wayne Smith. Apparently he told the story from the dog’s point of view. That’s not the case in the movie, but Thor is definitely a main character, in my opinion the hero of the movie, and he does have scenes where he goes off without the humans and you follow what he’s up to. He’s trying to protect the family but he’s fucking up what Ted’s trying to do, so they become rivals. And although Ted started out as a sympathetic character he turns into kind of a dick during this conflict and, sorry dude, the audience is going with the dog. The full time dog.

You know Thor is the hero because there’s actually a part where he gets framed for murder. And you know this is a unique movie because there’s a point where Janet suspects that either her brother or her dog has committed murder. One or the other, she has reasons to suspect both. They say this couldn’t possibly have been done by a human, but the idea that Thor did it doesn’t feel right either. She doesn’t know what to believe.

SPOILER. I think this is historic, my first (but hopefully not last) urination spoiler. This is a great moment in the movie so skip over this paragraph unless you’ve seen it or aren’t sold yet. At one point in the movie Thor goes over and pisses on Ted’s trailer. I assume he’s deliberately trying to mark his territory, to protect the family from this werewolf, drawing a line in the sand. But Brett just thinks he’s being a dumb dog. When Ted comes out of the trailer he looks over and sees that the tire is wet, probly smells it. Just a little reason to be annoyed with the dog. Ted knows that the dog knows about him and it grows into a whole rivalry, he sort of has to get rid of this dog to protect himself, and eventually succeeds when he tricks Thor into attacking him in front of Janet so everyone will believe the dog really is out of control and send him away. You can understand Ted doing this for self protection, but he also kinda hated that fuckin dog, so he’s real pleased with himself that he’s won this little competition. So what does he do? He walks over to Thor’s dog house and pisses on it.

Now that’s a fuckin movie right there! I’ve never seen that in a movie before. But I guess there aren’t that many human-dog rivalry movies. Maybe you don’t need a dog in there. Maybe they could do it in a movie where two dudes fight over a girl. But so far I think it’s only in BAD MOON.

So I love it for its uniqueness, but also the things that are in every werewolf movie are well done. For example, of course they gotta have 1. an old werewolf movie on tv and 2. a discussion about the rules of werewolves. But I like the way it comes out, with Ted explaining how it works but playing it off like he’s just joking around.

Some people might consider the monster effects clunky. They’re no AMERICAN WEREWOLF but I think they’re really cool. Although post-JURASSIC PARK this was still early enough that computer animation wasn’t very affordable, so other than a scene with some unfortunate “Black or White” type morphing it’s all done with good old fashioned puppets and costumes like the Lord meant it to be. You can tell the wolf heads have a limited range of expression so it’s great that the state they chose to focus on is mouth wide open, eyes crazed, the height of viciousness.

This also has one of the best reactions to a werewolf attack I’ve ever seen. When a guy sees the wolf coming at him he doesn’t just scream in terror, but also confusion, like: “wha-uuuuUUAAAAAHHHHH!?” It’s funny because it’s so true, it’s not only being attacked by a huge animal but also having your entire world tipped upside down.

I wonder, was that werewolf in the opening scene Nepalese, or some dude from somewhere else traveling around trying to cure himself, like an Incredible Wolf? If he was Asian does that sort of make Ted part Asian, now that he’s become wolf? Or is he Hindu now? I don’t really know how it works in the werewolf culture. Maybe because of this werewolves are above racism. Everybody’s got the same wolf in them. But I guess that’s why they focus their hatred on vampires. Or probly they would focus it on cat people if that was more of a thing. I wonder if they hate mail men? I guess probly not unless they were forced to live in a yard where the mailman comes every day. I don’t know, I guess until you’ve been in their paws it’s hard to imagine what their life is like.

What I do know is I highly recommend this one. Please spread the word ’cause as far as I can tell it doesn’t have much of a reputation.

Eric Red Mariel Hemingway Michael Pare werewolves
This entry was posted on Saturday, November 19th, 2011 at 4:05 am and is filed under Horror, Reviews. You can follow any responses to this entry through the RSS 2.0 feed. You can skip to the end and leave a response. Pinging is currently not allowed.