Oh, is this what “hipsters” are that everybody’s always worried about? I can never really tell. I definitely don’t think these are “geeks,” unless it’s the honorary kind that have to have somebody on the internet vouch for them, like “no, Vin Diesel really is a geek, he showed me he had Dungeons and Dragons dice in his glove compartment.” No, I get the idea these guys are hip, and therefore hipsters. But they might just be civilians. I’m not very good at this.

BELLFLOWER is the story of two twenty something dudes in California, Woodrow (Evan Glodell, also writer and director) and Aiden (Tyler Dawson), who love the MAD MAX movies, or at least part 2. Well, what else is new, right? I’m sure they also like pizza. Not exactly a unique trait. But these guys take their love further than the average citizens, they have figured out the name and logo of the gang they would have after the apocalypse and have been dedicating their time to building a blowtorch and dreaming of their ideal fire-spewing post-apocalyptic muscle car. It might be cooler if this was a hobby they pursued stone faced, instead it’s more of a smiling, awfully-proud-of-themselves type of not-exactly-ironic type approach. It can seem smarmy at times, but at least it feels like some real guys you might know, and not some winky comedy type of deal.

But there are no gangs of roving bandits or anything for these boys to deal with, so instead they just go to bars and try to meet girls. You should know that that’s what this is about, it’s an indie relationship drama. Woodrow meets Milly (Jessie Wiseman) when he competes against her in a cricket eating contest at a bar (you know how it is) and they end up on a date which turns into a spontaneous road trip to Texas to get meat loaf. Woodrow’s car Speedbiscuit has a tap in the dashboard that dispenses whisky – simultaneously his best and worst invention. 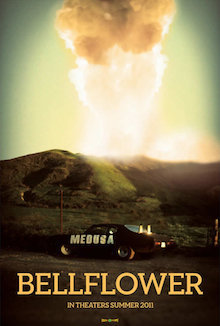 They drink constantly, say cute things, cuddle, he tries to be macho but gets punched in the face so hard it makes him puke, they laugh about it. When they come back to L.A. there are parties, conflicts, fights. He starts to turn into kind of an asshole. Every once in a while he goes out  with his overly forgiving best friend Aiden to test the blowtorch or shoot guns. When his life takes a dark turn Aiden tries to cheer him up by buying him a car and beginning to build it into there dream car, Medusa.

Like many men of this age group Woodrow and/or Glodell seem to think that growing a shaggy beard equals substance and an aura of mystery. So he grows a beard as the story goes on and he becomes more troubled. I think it’s supposed to make him look more badass when he turns angry and violent, but I don’t know about that. I’m just glad he’s not wearing one of those lady scarfs that men wear now, those look even worse with the beards. I heard an interview with Glodell and he seems like a real easygoing goofball, I suspect the broody hairy side in this movie is more of an act than the other part. He doesn’t seem to take himself as seriously as the character starts to.

The digital cinematography looks real nice. Apparently they jerry–rigged their own deal that used vintage camera parts along with the modern digital. The acting feels very natural (less so in a few of the later scenes where they flip out on each other – it probly just means the actors aren’t used to throwing hissy fits). The actors look like L.A. people, not Hollywood people. They seem real, and I like how my initial judgments of them didn’t really hold up. At first Aiden seemed like what they call ” a douche,” but he’s so loyal to Woodrow and so upbeat that you gotta like him. Also he gives Woodrow a (morally questionable) pep talk entirely based around the philosophy of Lord Humungus. His insistence on building the car is supposedly gonna prepare them for the apocalypse, but what it really does is prepare Woodrow for his own personal apocalypse. When things go south in his life and relationships he can always hop in Medusa and leave town.

These people are always drinking. Things don’t always stay happy and nice, but there’s never a “you drink too much” scene. It might just be that the filmatists don’t realize they drink too much, but I’ll take it as them being subtle and not rubbing your nose in it. You get it.

So I enjoyed this one. Any misgivings I had weren’t necessarily flaws in the movie, just more of a generation or cultural gap between me and the characters. I mean, how much time do I really want to spend with these dudes? And am I imagining it or do none of these characters ever once have to go to work or mention how they get their money to pay rent? They do that in alot of movies I guess but it sticks out more in something that looks and feels as naturalistic as this. It seems to have more of an obligation to be true to life.

“Bellflower” is the name of the street they live on. You see the street sign in one shot, and if I was supposed to understand why that is relevant in any way I sure didn’t take the hint. I honestly think they could’ve come up with a much better title, such as MEDUSA MY LOVE, DRIVE ME CRAZY, BEARDED JUSTICE, FIRECAR, RELATIONSHIP MASSACRE ON BELLFLOWER AVE., KILLCAR, KILLMOBILE, KILLDRIVER, DRIVEKILLER, THE BREAKUP 2: CARS or CARS 2: THE BREAKUP.

As far as independent relationship drama type shit this is a pretty good one, but I definitely hope Mr. Glodell chooses to use his unique talents for the betterment of mankind in the future, by which I mean making movies more about cars and fire than about heartache. I mean, he can do what he wants, but he’s a tinkerer, really building all these unique cars and weapons and cameras himself and to me that’s a hell of alot more interesting than what happens between him and his girlfriend. There are millions of people that can grow a beard and stare out a window, but not as many that could build Medusa and drive her around without blowing themselves up.

post-apocalypse
This entry was posted on Monday, November 21st, 2011 at 2:36 am and is filed under Drama, Reviews. You can follow any responses to this entry through the RSS 2.0 feed. You can skip to the end and leave a response. Pinging is currently not allowed.