Released in ’89, but filmed in ’86 by one-time director Douglas Grossman and writer Leo Evans, neither of them horror fans, HELL HIGH is a befuddling story about a group of kids harassing and sexually assaulting their biology teacher because she told them to be quiet and take their test. But what they didn’t bargain for is that she’s a traumatized nutcase and the source of “the Legend of the Swamp” they keep talking about.

The prologue to the movie sets the whole thing off on such bizarre and illogical footing that most of the movie is able to glide on the momentum from it. This is a stupid and amateurish movie and I’m really not sure what the hell they were going for, and that’s why it stays compelling through to the end.

An almost sarcastically happy girl in a puffy pink dress with a giant bow on the back carries her dolly down a muddy road to play tea party in a little shack that looks like an outhouse. Suddenly she hears a motorcycle pulling up, so she climbs out a hole and watches inside as a tough guy in a leather jacket pins his girlfriend down and starts roughly squeezing her boobs. When she tells him to stop he gets so mad he pulls the girl’s dolly’s head off and hits his girlfriend with it. (Seems like the doll would be a better weapon if it was kept intact, but who knows how these abusers think.)

Well, after the doll-head beating he gives up and they get back on the motorcycle, head down the road, turn back around and pass the shack again. The little girl has now shoveled a bunch of mud into a bucket which she throws into the biker’s face – causing him to crash, causing the two to go flying into the air, and they are both impaled on some big metal spikes that are sticking out of the ground for some reason and that were not shown before but isn’t that really how this sort of accident happens, you don’t notice the big metal spike until it’s too late. 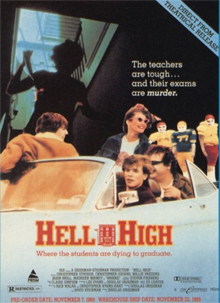 18 years later of course that little girl (still living next to the muddy field they call a swamp) is Brooke Storm (Maureen Mooney), the uptight teacher. One of her students, Jon-Jon (Christopher Cousins), has just been kicked off the football team for cowardice (?) and is being picked on by the coach (J.R. Horne) and the other jocks. But he finds a new group of friends in Queenie (Millie Prezioso) and Smiler (Jason Brill) when their leader and master of mean pranks Dickens (Christopher Stryker) calls the football player gay and tells Jon-Jon they should be friends now because they all hate football. So naturally they make plans to hang out and go to the football game.

Smiler just giggles and throws popcorn at people, Dickens wanders out onto the field and pulls a knife on an injured player before he gets put into the ambulance. It seems like they’re genuinely interested in the game, though, until they spontaneously decide to drive out onto the field in Dickens’s convertible. Nobody seems too shocked about it until the moment that Jon-Jon intercepts the ball.

(In one of the few really natural bits of acting in the movie there’s a shot of some players on the other team laughing about what just happened, instead of the standard issue shock and outrage at the System being turned on its head or whatever.)

Then they all go out to the teacher’s house, watch her clean her boobs in the shower, and hatch a Scooby-Doo style plan to scare her. Since these kids just fuck around in class and don’t do anything they’ve grown into 25-year-old-looking mush-headed idiots. So when they decide they need swamp slime for their prank the three of them actually go out and use their bare hands to scoop green sludge one handful at a time into big garbage bags. Even the little girl in the prologue knew how to shovel mud into a bucket. This is just sad.

Dickens is clearly the biggest troublemaker out of these guys. He’s the one that got in Ms. Storm’s face in class and got slapped. He’s the one who openly drinks Jack Daniels in front of the school and while driving. And not in the small bottle either, the bigger one. He’s the one that pulled a huge knife on that football player for no reason. So he’s also the one that goes into the house by himself and find the teacher in bed not able to fight back because her friend gave her Quaaludes to calm her down. Meanwhile Smiler, waiting outside in the car, smiles and says “No telling what that Dickens is up to!” You gotta love that little scamp, always stirring up a ruckus, raping, etc.

So we’re left thinking oh no, who’s going to stop Dickens from doing what he’s up to? Looks like it’ll have to be Queenie. She comes in and sees what’s going on. She’s been fed up with all the Dickensian crap lately, and plus she’s a girl. So she starts chewing him out, telling him to stop.

But wait! She wants him to stop so she can “show him how it’s done”! She climbs on Ms. Storm and starts fondling her boobs in a more gentle, loving but not consensual manner.

Finally Jon-Jon shows up, and he tries to intervene. He doesn’t want to take over either, he actually wants to stop the assault. Not necessarily because he’s against raping, but because, as he explains, this is a crime that could have real jail time and they have to worry about their “future.” But of course, guys like Dickens don’t really care too much about the future, so that’s not a strong debate tactic against him. 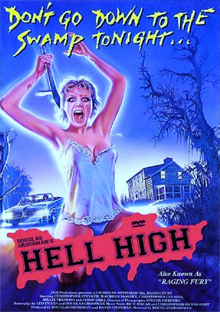 To me HELL HIGH doesn’t come across as intentionally comedic (except maybe when the character who asked in class why it’s important to use a #2 pencil much later gets stabbed in the head with one), and certainly is not gonna scare anybody. But it is fun as the kind of crappy horror movie you can laugh at a little. And it has a couple gory parts if you’re into that. The head-bashing scene I thought was disturbingly realistic, although probly just done with a foam rock.

What makes the movie worthwhile is all the weird little touches that I can’t explain.

The parts I liked best/was most confused by:

*the coach, after bringing Ms. Storm home from the football came, stops and makes a speech to himself on the porch about how the kids let him down because he would’ve gotten laid if they didn’t suck so bad

*Jon-Jon, when he first sees Queenie’s house, for some reason mutters to himself “America.”

*Smiler, after they’ve assaulted their teacher and caused her to flip out and everything has gone to shit, laments “My mother told me there’d be days like this.” Dickens, meanwhile, lays on a bunk bed staring at the ceiling and cuddling Ms. Storm’s Raggedy Ann doll.

*Dickens always wears a jacket that says “RAIDERS” on the back. This is clearly not the ubiquitous black pirate-themed Oakland Raiders jacket familiar in the ’80s and in early gangster rap. I checked and there are some old Raiders jackets that don’t have the logo on them, but I don’t think there were ever maroon ones. What is it supposed to mean? Is it the name of his one-man gang? Is it unlicensed NFL merchandise? I don’t know.

*Toward the end of the movie there’s a pretty impressive motorcycle stunt and explosion. But even after rewinding and watching it again I couldn’t figure out who these people were or why Jon-Jon ran them off the road, possibly killing them.

The DVD has plenty of extras including director commentary, Joe Bob Briggs commentary and interviews with the director and writer, but luckily the movie still remains a mystery to me. The director seems like a normal guy, not a weirdo, except when talking about his delight in the head-bashing scene because he’d been dating the actress and then broke up with her. But the way these guys talk about the movie I still can’t figure out what they were going for. They mention BLUE VELVET and PHANTOM OF THE PARADISE, two movies I definitely don’t notice having any connections to this. They talk about how their big idea was to combine the horror movies that were popular at the time with teen movies, but of course the horror movies that were popular at the time were teen movies. They talk about going to a midnight screening where the audience “got it,” which makes me wonder what there is to get because I must not’ve got it.

Slasher Search slashers
This entry was posted on Thursday, October 13th, 2011 at 2:50 pm and is filed under Horror, Reviews. You can follow any responses to this entry through the RSS 2.0 feed. You can skip to the end and leave a response. Pinging is currently not allowed.