Brandon Routh plays the title character (well, the “Dylan Dog” part of the title; the “Dead of Night” part is played by various undead creatures). I’m not really clear if “Dog” is his last name or if it’s just a cool nick name. Nobody ever calls him “Dylan Doggy Dogg,” but it might be short for that. Anyway he’s a private eye who is in on the secret information that there are vampires, zombies and other monsters living among us. 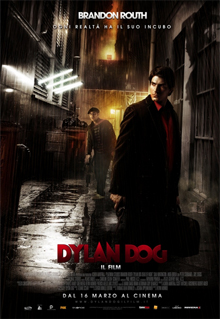 Dylan actually used to be the chosen liaison between the living and the dead, but then some tragic shit happened with his wife or fiancee or something and he said “fuck this” and switched to regular old taking photos of people having affairs. But, like most independent business owners in this economy, he’s struggling. He needs money bad but he still tries to turn down a big case because it has that nasty wet werewolf smell all over it. He left all that behind for a reason, and not just racism against werewolves.

But of course he gets dragged in and as he reveals to his client what really goes on in the world we get to learn it too. It’s like that scene in the first BLADE where he says the world we live in is a sugar coated topping and explains all the secret vampire symbols and shit. Also it’s like BLADE because the vampires like to hang out at a dance club. If I was a vampire I’d be concerned about that stereotype.

Part of it also reminded me of BEETLEJUICE. It gets pretty cartoony. So yeah, picture a movie somewhere in between BLADE, CONSTANTINE and BEETLEJUICE, but with Superman in it, wearing a red shirt. And not as good as that. But not terrible.

There are some amusing ideas here and there: a vampire drug that uses a crack pipe filled with blood, an underground network of undead people that work in food service, a part where Dylan insults a werewolf by saying “You hit like a vampire!”

I thought Routh was pretty good as a Christopher Reeve lookalike in SUPERMAN RETURNS, but of course that turned out to be a one time deal, like George Lazenby as James Bond or the kid that played Harry Potter in part 5 while Daniel Radcliffe was in Afghanistan. It would be kind of sad to just be known as the actor who came out of nowhere to be in this huge movie playing Superman and then it didn’t really catch on. 20 years later he’s playing a stepdad in some shitty TV movie and people are still coming up to him on the street saying “Hey, Superman! I totally forgot about you! You were Superman, that’s hilarious! Do a Superman pose next to me! Oh, come on, please? Fuck you then. Why do you think you’re so great? That movie sucked! I preferred STEEL!” So I’m happy for him that he’s getting at least halfway decent roles where he can show his range. Here he seems more like Tom Cruise than Christopher Reeve, actually. He’s a fast-talking, sarcastic knowitall kind of guy. He has some range.

Dylan has a sidekick played by Sam Huntington, who according to my detailed research is the same dude who played Jimmy Olsen in the SUPERMAN picture. So that’s weird. Also weird is that he wears the same type of hat that Shia LaBeouf wore as the sidekick in CONSTANTINE and I, ROBOT. He is this generation’s Shia LaBeouf, now that the original Shia LaBeouf is too old and washed up. He works for Dylan and wants to be his partner but Dylan shuts him down and is cold to him. In fact, he doesn’t even tell him about monsters existing and all that shit. But it’s really because he’s trying to protect him. Once he becomes a zombie their relationship gets much better.

Peter Stormare and Taye Diggs both have pretty good but not very memorable roles as prominent figures in the monstro-american community. My favorite supporting character is Wolfgang played by the wrestler Kurt Angle. He’s just kind of a working class type dude who happens to turn into a hairy monster guy. I didn’t actually know him from WWE but I liked him in this. He also got the most full-fledged fight scene.

The writers, Thomas Dean Donnelly and Joshua Oppenheimer, previously did SAHARA (heard it was pretty good), A SOUND OF THUNDER (heard it was hilariously terrible), and about a hundred and fifty upcoming adaptations and remakes and shit including CONAN THE BARBARIAN, UNCHARTED, DOCTOR STRANGE, VOLTRON and probly RIPTIDE or 60 MINUTES and maybe MARBLES and its spin-off CHINESE CHECKERS. This one they adapted from an ’80s Italian comic book, but from the pictures they got in this here internet it looks like the comic book would’ve worked better done by some giallo director in the ’70s. I’m guessing the tone is a little dryer and less goofy. Then again they got a guy who looks like Groucho Marx as the sidekick.

(By the way there’s some connection with this and CEMETERY MAN. The comic strip character was modeled after Rupert Everett and then in that movie Rupert Everett was dressed as Dylan Dog but he was playing a character from a book by the same writer that appeared sometimes in the comic book but was actually a separate character than Dylan Dog or something… I don’t know, but you guys can explain it to me in the comments before you start talking about Batman again.)

The director’s name is Kevin Munroe and his previous directing credits are TMNT (computer animated turtle movie) and some video game. Funny, JONAH HEX was directed by a guy who had only done HORTON HEARS A WHO. I guess so much for the “computer animation director + first live action movie + cult comic book character” formula. We’ll see what happens when it’s Pixar guys adapting pulp stories or sequelizing TV show adaptations.

Anyway the director’s lack of track record explains the somewhat cheesy feel, but actually with that in mind he did a surprisingly good job. It’s a pretty low budget movie at $20 million, but I might’ve guessed lower. I don’t know. It definitely feels like a b-minus movie, and has some especially dumb looking werewolves. But it moves at a good pace, it doesn’t meander. He looks out the window to a tree, cut to him up a ladder in the tree finding evidence. It has some momentum to it which is sadly rare in these type of movies these days.

And most of all I like that it doesn’t all come down to a good vs. evil type deal. Yeah, there’s a magic cross that they’re trying to get to, I don’t remember, take over the world or New Orleans or something. But it’s all about how there’s a truce between men and monsters, and Dylan is trying to keep the different monster clans from fighting each other too much, and some of the characters sort of make up with him. I’m a sucker for that type of shit, I guess.

I can’t really recommend expending effort to see this movie, but in my opinion if you are laying there and it’s on cable and it’s too much of a pain in the ass to find the remote, or if it’s on a plane or in a jail or something it might amuse you. I thought it was okay. If I was on Rotten Tomatoes I would totally bring that 3% rating up to, like, 3.04% or something.

To be clear, he is not a dog, that is just his last name. Not sure if I got that across or not. It’s not like Marmaduke or something, it is a human movie.

Brandon Routh Peter Stormare Sam Huntington Taye Diggs vampires werewolves zombies
This entry was posted on Tuesday, August 2nd, 2011 at 11:45 pm and is filed under Comic strips/Super heroes, Horror, Reviews. You can follow any responses to this entry through the RSS 2.0 feed. You can skip to the end and leave a response. Pinging is currently not allowed.