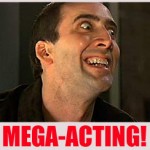 Okay, there’s almost no substance to it and it’s done in a painful junket-interviews-transformed-into-entertainment-TV-for-stupid-people style, but in this clip from whatever “Rotten Tomatoes TV” is Cage will be allowed to briefly mention his admiration for Van Damme’s performance in JCVD. Ironically they’re trying to get him to do a sort of “guilty pleasures” type approach even though he’s fucking promoting THE SORCERER’S APPRENTICE.

There are two other cast members that choose their own “Movie Confessions” and I’m a fan of one of those movies too but I won’t say which one.

JCVD Nicolas Cage
This entry was posted on Wednesday, July 20th, 2011 at 12:34 pm and is filed under Blog Post (short for weblog). You can follow any responses to this entry through the RSS 2.0 feed. You can skip to the end and leave a response. Pinging is currently not allowed.