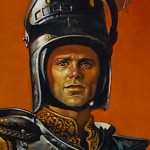 If the cast was just nobodies it might not work, instead we got Ed Harris (also director) as Virgil Cole, Viggo Mortensen (not director) as trusty sidekick Everett Hitch. Virgil has aspirations to become a legitimate lawman, Hitch has an 8-gauge shotgun. They come into the town of Appaloosa to work for the elected officials who’ve been shoved aside by Jeremy Irons, a tyrant whose big shot status comes from claims he’s friends with Chester A. Arthur (come on, everybody uses that one). Him and his gang run the town, everybody’s afraid of them, the usual. So our boys become marshals and to everybody’s shock they have the balls to start arresting people, and the shit and fan quickly become intimates. 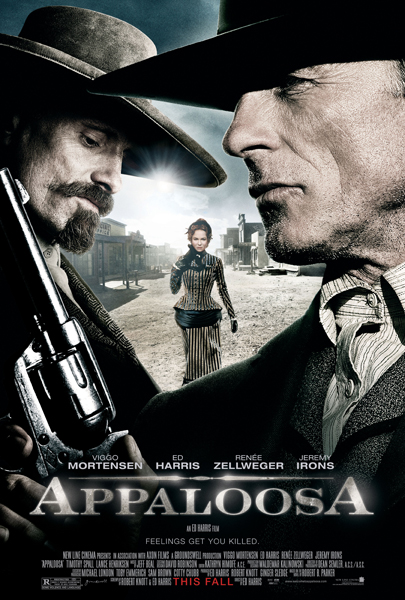 Now here’s the problem: Renee Zelweger. I don’t get it. I know she must’ve done some good performances at one time, but she’s usually not appealing. She has a pinched little face and an evil vibe, but tends to play characters who are supposed to be lovable beneath their cold, bitchy shells. To me this is not believable. I thought it was just me since she keeps getting cast in movie after movie and winning all kinds of awards, but an informal poll found that 100% of males hate Renee Zelweger in their movies. Because of this you lose respect for Virgil when he immediately becomes smitten with supposedly-innocent-seeming piano player Allison French.

But never fear! This is not like LEATHERHEADS, which made the unfortunate assumption that the audience too would be charmed by Zelweger. She quickly makes a pass at Everett, among other activities that mark her as a despicable ho, and threatens to become the less talented Yoko Ono of the old west. I would have to say the movie is sexist (the only other female character actually is a whore) but as a story it works. The best part is that the trailer, the DVD cover and your experience as a person who watches movies all lead you to think this will be a love triangle. Everett will fall for the girl too, or Virgil will think he has, and this will break up the team. All signs point to that as the last act, but the movie has other plans.

And that brings me to the political part. I don’t know what the author of the book (Robert B. Parker, creator of Spenser For Hire) intended, but this story definitely plays to me like a commentary on the Bush era approach to homeland security. Cole and Hitch come into town with a set of laws already written up and tell the officials they either have to sign it now or forget it. That’s gotta be the USA-PATRIOT ACT, right? Maybe it could be called the APPALOOSA-COWBOY ACT. The town officials are uncomfortable with the idea but sign without reading it.

So the marshals pretty much run the town, they can do whatever they want. In a way this is good, because they’re the good guys, and can use this to stop Jeremy Irons. But on the other hand, Virgil’s judgment is not always the best (for example, he’s building a house with Renee Zelweger) and at times he could be seen as abusing his power. And even worse, the guilty Jeremy Irons (SPOILER) gets set free because his trial was unfair. It’s Guantanamo Bay or Freddy Krueger all over again.

I really liked that about the movie and I figure that’s part of the reason why Viggo would want to take the role (another part being that Ed Harris asked him to). But it’s not even the best part of the story – the best part is the camaraderie between these two gunmen. Viggo is the rare superstar leading man humble enough to play the quiet sidekick without it seeming like a stunt. He’s smart enough to know this can be a great character and talented enough to make sure it turns out that way. He communicates more with his face than with words – the “oh geez, maybe I should’ve told him his girlfriend was a ho” squint as Virgil trades their prisoner for Zelweger, the uncomfortable stare at the dirt after passing the binoculars so Virgil can see his girl frolicking naked in a river with Lance Henriksen (long story).

Badass Laureates Ed Harris Viggo Mortensen
This entry was posted on Tuesday, January 27th, 2009 at 2:52 pm and is filed under Reviews, Western. You can follow any responses to this entry through the RSS 2.0 feed. You can skip to the end and leave a response. Pinging is currently not allowed.