But because I enjoyed it so much that second time I think I need to give it more of a waiting period before I check out the new, longer version. I don’t want to wear out AVATAR. So now I’ll stick to something that is not AVATAR, and THIS AIN’T AVATAR, due to the title, is the only movie I could feel 100% confident was not gonna be AVATAR. 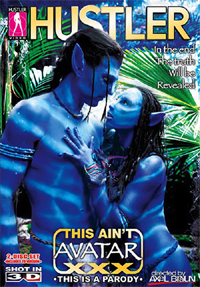 Chris Johnson plays Jake Skulley with a sometimes-weirdly-accurate rendition of Sam Worthington’s Australian take on an American accent. As in the original Jake is our on-camera narrator and a quadriplegic soldier who has been drawn into what I guess must be called the This Ain’t Avatar Program because of his dead scientist twin brother. I thought he said the planet’s name as Pandora, just like the original, but I have read that supposedly it’s Panwhora. “The Corporation” are there to get viagratanium, a pile of chalky substance that they eat and get addicted to. But Jake says he’s heard stories of “ten foot tall naked babes with tails,” so that’s a good reason to be there too I guess.

Warning: if you’re not familiar with the original AVATAR this movie doesn’t really explain the concept of how the earthlings control genetically engineered Na’bi bodies to infiltrate the native culture of the planet. If you don’t want to have to watch AVATAR to be ready for this one maybe wait for the novelization to come out.

Obviously the big question here is how are they gonna fuck without smearing blue all over each other? According to a Hustler press release they “used an alcohol-based paint so that it wouldn’t sweat or rub off during the film’s most important scenes.” They go on to brag that they used more than 40 bottles of the makeup and that they cost more than $50 a bottle, so “you can imagine what kind of finances went into airbrushing the actors blue!” Well, I got a calculator so I’m going with more than $2000. I’m not sure how well that backs up the much-repeated claim that this is the most expensive production Hustler has ever done, but it’s a good gimmick to say that. I like it.

Anyway, the paint seems to work. In this first Na’bi sex scene Grace has on her human style clothes (including G-string) which she removes to reveal the blue skin beneath, all done in one shot. Not because it’s trying to be like CHILDREN OF MEN, but because it’s a porno. In the real movie the HATCHET guy was a somewhat neglected character, in this one he gets to bone Grace as soon as Jake wanders off to investigate a sound. “One trigger happy marine on this force is too many. Besides, we don’t really need him here, do we?” (cue making out)

Now, I don’t want to disappoint anybody, and this may be a huge sticking point for some people, but I think the public has a right to know: the dicks are not blue. The dicks are regular flesh colored. I guess they didn’t want to risk ingestion. But otherwise the paint seems to cover everything. Toward the end of the scene it looked to me like some of the blue was smearing off of Grace’s chin, but I’m not positive.

(by the way, no sign of a This Ain’t Hometree in this. So if you were hoping for a giant dick called Bonetree you’ll have to wait for part 2.)

There’s not a whole big army of Na’bi, but there’s a couple of them. Jake chases the girl through a sort of half-assed black light jungle area before confronting the tribal leaders. He defends himself by saying “You don’t understand, I was just chasing a piece of tail.” Speaking of which, the tails he mentions in the opening do not seem to exist, and the Na’bi might not actually be ten feet tall either, depending on your interpretation of the human girl who fucks a Na’bi guy and seems proportionately appropriate. I choose to believe that she is also ten feet tall, but you may think otherwise. She’s involved in the most ambitious sex scene, the traditional Na’bi “Feast of Souls” orgy of three couples going at it, 5 out of 6 of them in full body (except for penis) makeup. Actually, the one with the human partner looks like he might have blue junk. It’s hard to tell sometimes because the lighting is pretty dark.

I would never say this if it wasn’t true, but to be honest I fast-forwarded through most of the sex scenes. So if I missed any important dialogue I apologize. Every once in a while I’d stop to check but I would just hear jungle bird noises in the background.

The story continues past what happens in AVATAR, since the entire battle is summarized in narration, and there’s some kind of twist ending that I didn’t get.

(THAT IS NOT A DICK JOKE, THIS IS A SINCERE WARNING THAT I’M ABOUT TO GIVE AWAY THE VERY END OF THIS AIN’T AVATAR)

Obviously you can’t exactly re-create the most expensive movie of all time on a porn budget, but I like all the little things they do to copy it. For example the end credits are a helicopter shot over rain forests and what not. Not bad. Also, they shot and released it in 3-D. Unfortunately the red and blue 3-D they use on home video still looks like garbage. They tried some gimmicky shots like holding things out to the camera and stuff, but it didn’t look 3-D to me at all and I didn’t want to spend alot of time experimenting since it’s a rental and I don’t know where these glasses have been.

Of course, Hustler takes a note from the Cameron playbook and argues for subtle, not-cool uses of 3-D. Rob Smith, director of operations for Hustler Video boasts, “Characters aren’t seemingly jumping out at you and there’s no need to watch the film in fear that something — or someone — might hit you at any time. That’s not the kind of movie we made. We made a film, where, when you’re watching it in 3-D, everything just seems to come alive. It has dimension, depth, and the sense that you could literally walk in to the frame at any second.” [and get fucked by a blue monster with braids]

I haven’t actually watched many of these parodies, but I think they’re more interesting and mysterious when they’re like this, marketed as a parody but not coming across like they’re really trying to be funny. This might actually be a smart thing because as I noted in my original AVATAR review there is probly a small segment of society who seriously gets off on the idea of sex with these blue cat people. I was thinking more of the regular-sized-man-fucking-giant-cat-woman angle, which is neglected in this, but if somebody just gets off on the cat people this is gonna be a hell of a Christmas for that person. Congratulations, Avatar fetishists. I’m genuinely happy for you.

I mean it’s pretty cool, I’m not trying to be condescending. It’s not my thing, but I’m glad somebody is getting treated to their impossible dream.

Like Cameron, Braun knows what it’s like to struggle on an ambitious project that seems troubled but that he really believes in. He spent 8 months of 2000 creating G-SPOT CONFIDENTIAL, his bid for an AVN Award. It was shot in L.A., Dallas, Paris, Prague and London, but in Europe the footage was seized by customs and he was charged with obscenity. So he took “a 4-month voluntary hiatus” to race cars. I guess this is his equivalent to Cameron when he won best picture for TITANIC and then spent years just doing 3-D Imax documentaries about underwater exploration.

Or maybe 2003’s COMPULSION was his TITANIC. I don’t think it’s a parody of the great Leopold and Loeb-based movie, but if it is I’d like to see what they did with Orson Welles’s legendary anti-death penalty court room speech. According to the websight Braun’s COMPULSION was “an incredible undertaking, with a budget of almost $200,000” and was nominated for 13 AVN Awards, almost tying TITANIC’s number of nominations for Oscars (the mainstream equivalent of the AVN Award).

We’ll have to wait and see if THIS AIN’T AVATAR can match TITANIC’s record, but if not Braun has plenty of other ambitious projects to be proud of or excited for. He produced the Batman one and apparently is working on a version of GREASE which includes five song and dance numbers. I don’t know if AVN voters are as much of suckers for musicals as the Oscar voters, but I bet they’ll be impressed.

62 Responses to “This Ain’t Avatar”