The first JACKASS movie was one of the weirder and more enjoyable crowd experiences I can remember. It was in a pretty small theater and the movie had been out for a while, but there was a decent sized audience, and more than any horror movie it seemed like we all went through some kind of torment together. We winced, we laughed uncomfortably, we even covered our eyes like Michael Jackson’s girlfriend in the “Thriller” video. It was such a good time I knew I had to see part 2 with an audience also. But for some reason I never made it. So I don’t really understand entirely what’s going on with these characters in part 3, I missed alot of stuff for sure. 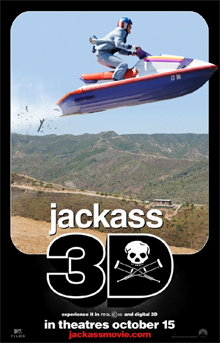 But I didn’t make the same mistake and miss the third one, because it’s in 3-D, and this is a movie where the two-dimensional video experience is just not gonna cut it. Technically this might be the best 3-D I’ve seen, maybe because it’s just shot straight up with hi-def digital 3-D cameras and doesn’t have to worry about a film look or special effects or anything. There was plenty of depth and not even a tiny bit of ghosting.

I think most of the same characters from part 1 are still there on the J.A.C.K.A.S.S. team. This time their missions include sneaking up and punching each other, supergluing themselves to each other, having a guy fart through a blow gun to fire a dart at a balloon hanging from another guy’s ass, bouncing off a giant inflatable balloon and everybody shoots at you with paintballs, throwing a bunch of things in front of a jet engine, etc. There is still alot of putrid bodily fluid humor, mostly involving shitting. One of the camera guys (credited onscreen as “Lance Bangs, documentarian”) spontaneously starts puking about 4 or 5 times, so he is the most relatable character. I had to avert my eyes during the sweat-drinking scene, and a lady in the theater I believe left to go throw up. But she came back for more.

Do you remember when you were a young man, and there was another dude, and you ran up and punched him real hard in the gut, and he groaned in pain and then laughed at how bad it hurt? JACKASS is the cinematic adaptation of that groan and laugh combo. This type of humor, all revolving around butts, dicks, and horrible pain, is thought of as little boy humor. But even most little boys are not this obsessed with farting on each other. It’s a very specialized, powerful strain of juvenile humor that’s hilarious and a little uncomfortable to see these increasingly grown adults giggling about.

There are a few prank type deals (Johnny Knoxville disguised as old man asks a random dude to take a picture of him making out with his supposed granddaughter, a pretty spectacular one involving little people in a bar brawl, etc.) This guy Bam Margera is always tormenting his parents, so in this one he has a (fake) gorilla trash their hotel room right when they get there and the dad is trying to take a shit. It might seem like you’d have to be really gullible to fall for that, but you gotta realize that this movie has the Jackasses facing down a ram, a bull, a herd of buffalo, an attack dog, some scorpions, a swarm of Africanized bees and a pit of snakes, all real. So it’s not out of the realm of possibility that they would fuck up and set a gorilla loose in a hotel.

But I’m glad they don’t do too many of the pranks, because they usually make me feel sorry for the people that get pranked. It’s better when the Jackasses turn on each other. They deserve each other.

One thing I really appreciate is that even though this is about dudes crashing things, throwing things at each other’s dicks and purposely causing animals to attack them it’s mostly done with an artist’s eye. I don’t think the audience demands that. Steve-O bungying up and down inside a shit-filled port-a-potty and then puking all over himself would be enough. But the Jackasses have this sense of visual camp humor and style that they always throw in there. They stage the stunt on a living room set or tie some balloons nearby for color. They like to go around in their tighty whiteys, sometimes topped with a silly uniform, a pair of angel wings or cheetah ears. When Johnny Knoxville jumps a jet ski onto land in the Hollywood Hills he does it in a powder-blue ’70s style tuxedo and Evil Kneivel American flag helmet with the others standing by wearing togas. When he gets run over by a buffalo herd he wears rollerskates and a pink cardigan with the Jackass logo stitched in the front. And for some reason there’s a disco ball and some cheap mylar decorating the bullpen. They create little scenes, like when they stage a miniature restaurant so a guy dressed as a waiter can be blasted by an actual jet engine.

This artistic eye works great with the 3-D. There is piss, vomit and shit that finds itself floating out of the screen, but more often it’s beautiful slow motion constellations of flying debris or colorful paintballs or things like that. I guess they have cameras that can shoot 1000 frames a second or something, so they make the human body seem to have the consistency of a can of cranberry sauce when it slides out all in one piece. There’s a whole bunch of slow motion shots of rubbery faces vibrating from the impact of a fist, a foot or a flying object, most impressively a rubber dildo that has just had a long, wobbly journey above miniature model cities.

The end credits are a montage of old clips and childhood photos set to a sentimental pop punk song with the Jackasses themselves singing “Memories / make me want to go back there, back there” over and over again. It really shows how they’ve grown up together and turned their weird shenanigans into fame and fortune. And I’m glad they all make it to the end alive. They have a weird camaraderie where they do horrible things to each other but then hug and tell each other they love them. The fat guy Preston even does this to the pro-football player who field goals his face, it’s his way of saying “Yes, I have been rolling around in the grass screaming in anguish for a few minutes, but don’t feel bad for doing what we asked you to do.” Steve-O expresses something similar to Preston after he finishes puking from drinking his ass sweat.

So there’s this sense of brotherhood but still, man, you don’t want to be a member of this brotherhood. Not only do you have to do these stunts (“Why do I have to be Steve-O?” Steve-O asks before allowing a baseball to be hit into his crotch) but you must live in constant fear of ambush. It can be as simple as somebody running up and hitting you in the face, as cruel as setting you up to fall into a trap door and then dumping real snakes on your head when snakes are your worst fear, or as gimmicky as sneaking up and peeing on you with a miniature camera providing a dick’s-eye-view. (In 3-D!)

The Jackass lifestyle must be kind of like being a rock star who’s in constant fear of roadside bombings and drive-by shit-throwings. On one hand you don’t have to punch a clock, on the other hand it’s hard to brush that taste out of your mouth.

I’d like to think they could retire after this one, stop risking their life and limb and after several years of night terrors and what not they might eventually lose the constant paranoia about snake and/or fart attacks. But then again, this is what they do. This is their form of expression. If you are a Jackass how are you gonna float around in a pool and drink mai-tais for the rest of your life? You’re gonna start thinking maybe I should jump a motorcycle off the roof. How many alligators do I need? I’ll put the camera over there. Here, let me get my pants off and find a good hat to wear… I’m not sure you can escape this life. But I wish them luck.

If you make another one, Jackasses, make sure nobody dies. Half the fun is being awed by the insane recklessness exhibited by the Jackasses. But it wouldn’t be as funny without knowing everything’s gonna be okay.

Johnny Knoxville part 3-Ds Spike Jonze
This entry was posted on Monday, November 15th, 2010 at 4:01 am and is filed under Documentary, Reviews. You can follow any responses to this entry through the RSS 2.0 feed. You can skip to the end and leave a response. Pinging is currently not allowed.