SQUIRM is an odd duck. (note: come up with worm pun, save “odd duck” for killer duck movie, or DON’T TORTURE A DUCKLING.) This killer worm movie pulls a bait and switch (get it, bait? not switch though, that’s not part of the pun) where it’s setting up the characters before it gets to the killer worm mayhem, then it starts to reel you in (reel) to what’s going on with these characters to the point where you don’t even care that it doesn’t show the worms much or kill very many people.

Not saying it’s as good, but for some reason it reminds me a little bit of PHANTASM with its low budget depiction of not-at-all-Hollywood characters uncovering weird goings-on in a small town. 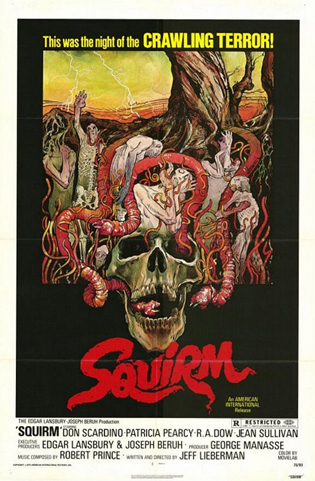 The main characters are Geri, a freckled mama’s girl in a small Georgia town, and Mick, her nerdy out-of-town boyfriend who somehow manages to shake everything up by coming to visit. He’s kind of a dipshit, introduced clumsily whacking other passengers with all his crap as he gets off the Greyhound. He’s got glasses and a high voice, comes across like a weenie and doesn’t have a clue how to fit in with the locals who are suspicious of city people. But at the same time you can’t deny that he’s a take charge guy. When the road is blocked by a tree he’s the only one who gets off the bus to walk the rest of the way; when they find (and then lose) a skeleton and nobody believes them he turns private investigator, figures out that there’s a freaky worm problem, triest to figure out why and find evidence so he can warn everybody of the danger, even though they hate him because they think he put the worm in the egg cream that he ordered (long story). Also they hate him because he ordered an egg cream.

Another weird character trait: he has a reputation for being into antiques, so some of the locals try to sell him antiques.

It’s funny because this character earned my respect over the course of the movie, but then toward the end he pulls a total bitch move, and I can’t even tell if the movie knows it’s a bitch move. During a dinner with Geri’s mom and sister a tree suddenly falls into the house and crushes part of it. He gets up calmly, climbs outside, looks at the bottom of the tree, and calls to Geri to come out and see the mob of worms that caused it. What he doesn’t do is help Geri’s mom up from under the debris that buried her, or even offer a courtesy “are you okay?” Even if he had x-ray vision and knew for sure that she was unharmed he should’ve done it because the mom is clearly a very traditional southern woman who has made a big deal about manners and about having a man in the house. And he seems really serious about her daughter. What the fuck is he thinking? He’s got worm on the brain. His fascination with the worm problem overrides all manly instincts.

Well, hopefully this fiasco will help Mom to realize that these three ladies have done fine without a man. They can handle it. Although he does figure out what’s up with the worms before they do.

There’s a weird situation with this character Roger, who works at his dad’s bait shop but also helps Geri’s mom with some work around the house. He’s a big muscular dude but with an exaggerated overbite and dumb hick personality, like a guy that would play the retarded rapist in an I SPIT ON YOUR GRAVE rip-off. Geri takes advantage of his obvious crush on her, getting him to loan her his truck (and getting him in all kinds of trouble by losing the hundreds of dollars worth of worms in the back), then getting him to take her and Mick out on a fishing boat, using Roger for his equipment and know-how but not letting him in on what’s going on with these killer worms. He knows how to do the manly working class things that this city boy egg cream-sucking antiquer doesn’t, but it doesn’t help him get the girl he wants. So I sympathized with Roger and was impressed that he didn’t seem to be following the normal trajectory of this type of character.

But then he does. Oh well. It’s still kind of unusual because we end up with a human villain even when there are killer worms about. One of the best and most ridiculous points in the movie is when (SPOILER) the entire first floor of the house is filled with a sea of killer worms and thought-to-be-devoured Roger comes crawling out and wiggles up the stairs trying to bite Mick. I’m not sure if the worms getting inside him are controlling him or if he just decided to adopt their killer worm ways for himself. You know, he figured humans were outnumbered and stealing his girl anyway so he might as well switch to the winning team.

Another weird touch in the movie is a trick used at the beginning and again later on, where it uses close up photography of actual blood worms (or whatever they are) opening their mouths, and it superimposes a weird metal screeching type sound so it seems like they’re screaming. I didn’t take this as a literal depiction of the worms screaming (there’s never a “what is that sound?” scene) but sort of an arty musical montage to show that these things are creepy.

They’re not intelligent worms, by the way. They’re not conspiring to get the neighborhood back from the humans. They’re just freaking out because of electricity going into the ground. There’s a simple explanation for all this. 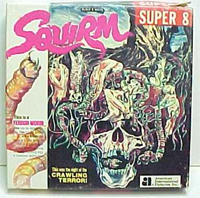 Most of these actors did not go on to do many movies, but Don Scardino, who played Mick, did a bunch of soap operas and then became a prolific TV director. These days he directs many episodes of 30 Rock. Writer/director Jeff Lieberman later did JUST BEFORE DAWN, which I liked. His most recent theatrical release was a really ridiculous one in 2004 called SATAN’S LITTLE HELPER. I never reviewed that but it’s about this masked killer who goes on a rampage on Halloween and a dumb little kid helps him because he thinks it’s pretend and it reminds him of a video game he loves. It’s such a stupid premise but made pretty hilarious by the kid’s giggly enthusiasm.

I know a guy who met Lieberman once. This guy happens to be a huge nerd for the Mystery Scientist show where the wiseass robot puppets are really rude and won’t stop talking during the movie. I guess SQUIRM was made fun of on that show, so when my buddy met Lieberman it was a unique opportunity to ask the director of a Mystery Scienced movie what he felt about that. It turned out he did not feel good about it at all. On the DVD commentary Lieberman says he feels that those puppets 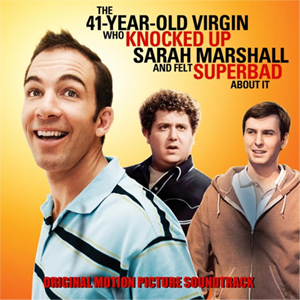 didn’t understand the movie and were “making fun of” things that were already intended to be funny, like that DTV comedy that “parodies” all the Judd Apatow comedies. But I don’t know, I guess you gotta figure that Cookie Monster can’t even really eat a cookie, I’m not sure why I would expect these puppets to have a nuanced appreciation of the low budget movies they watched.

I always wondered why somebody didn’t shush these guys or at least go get an usher to get those fuckin robots to shut the hell up, but my friend explained to me that they’re supposed to be on an orbiting prison planet, like ALIEN 3, and watching “bad” movies is their punishment. I forget what their bid was for but I think he said it was sort of tangentally related to child sex trafficking or something like that. In the last episode they were busted out of prison by the space CIA for a black ops mission where their film knowledge would come in handy, like the English film critic in INGLOURIOUS BASTARDS. But they kept cracking wise so the mercenaries they were working with just got sick of it and melted them down to make new helmets. They were never able to save the space president who ended up being executed by militants and the universe went conservative for like 400 years just because of these asshole robots not knowing when to shut their stupid gumball machine yaps. Apparently a very powerful and provocative episode though.

I didn’t think SQUIRM was exactly a comedy, but not laugh-at-able either. It’s an odd, surprisingly compelling set of characters who get attacked by a bunch of worms a couple times. You’ll be hooked.

Jeff Lieberman killer animals
This entry was posted on Saturday, November 13th, 2010 at 8:21 pm and is filed under Horror, Reviews. You can follow any responses to this entry through the RSS 2.0 feed. You can skip to the end and leave a response. Pinging is currently not allowed.