This is the movie Spike Jonze has been working on for years, based on the famous Maurice Sendak picture book. You probly read about how Sendak asked him to do it, at first he turned it down, then he thought of an idea for it, they started making it, one studio dropped them, they moved to a different studio, continued making it, that studio freaked out when they started snooping around and found out there was no farting or Smash Mouth songs in it. Rumors circulated that they were gonna fire Jonze and start over or redo some of his scenes with CGI or who knows what. But he kept on going and they must’ve either got distracted by something on TV or decided he knew what he was doing. Somehow he got to the end and looked down and in his hands he was holding the movie he set out to make at the beginning. Except transferred into Imax. Nobody knows how it got there. 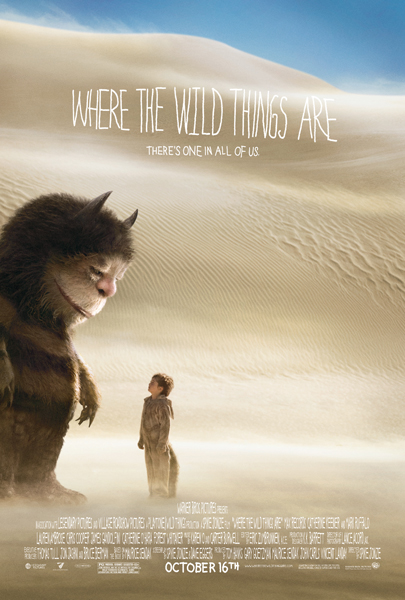 Mr. Jonze deserves a Congressional Medal of Freedom for pulling this shit off. In a genre where movies are always shaped around Happy Meal and doll tie-ins I swear he’s made a movie without a single commercial compromise or concession to Hollywood formula. He’s not trying to bullshit you or your kids, he’s tapping straight into a kid mentality, which doesn’t mean poop jokes and Hannah Montana references, it’s more primal. At times in this movie I felt like it was making me regress to being a little kid, remembering the simple joy of throwing things, breaking things, building things, making up stories, and also the feeling of being hurt by small things like mom or big sister won’t pay attention to you exactly when you want, so you go hide in your room and feel sorry for yourself. Max has those feelings and then Carol, a wild thing portrayed brilliantly by the voice of James Gandolfini, amplifies them to giant size. He represents the needy side of a kid, the one that feels sorry for himself and gets angry too easily (which leads to the much hyped make-kids-cry part of the movie when he briefly chases Max claiming he’s gonna “eat him up.” But don’t worry kids, he’s full of shit. He’s got no follow through on shit like that.) Carol is a character like I’ve never seen before – a monster who’s only scary because he’s so emotionally fragile you gotta walk on egg shells around him. They should try that in a Godzilla movie some time.

All of the wild things seem to represent different sides of Max’s feelings or things in his life. For example there’s a little goat who thinks nobody listens to him or pays him enough attention, and a girl named K.W. who everybody thinks is cool and wants to impress (like he feels about his older sister). They’re basically huge, hairy kids building forts and getting confused about things. They even have snotty noses. Max (both the character and the kid who plays him, Max Records) seems like a smart and imaginative kid, but not in some phony HOME ALONE way where he has clever quips and talks like an adult. No, he talks like a kid. His stories and games don’t make alot of sense, and involve lots of force fields and lava and shit. Very authentic.

I can’t imagine anybody else in the world would’ve done a “Where the Wild Things Are” movie and approached it remotely similar. Even a good director. Most people see a drawing of monsters they’re gonna go the heavy handed art director route, create a stylized environment for them to live in, show offy camera moves and a Danny Elfman soundtrack. Jonze did none of those things. Most of it is filmed handheld on location in Australia, just fields, sand dunes, woods and stuff.

In order to avoid that “how do you act when there’s not a real dinosaur chasing you?” question at junkets they built giant suits of the wild things. Only the faces are (flawlessly) digital, and I didn’t even really think about them being special effects. Of course doing it that way looks more real, but more importantly it helps the acting. It’s a real kid running around playing with the things in person, not faking it. And it seems more dangerous, because they’re so big, they seem like they could accidentally crush him.

So that’s what the movie is, and I think it should also be mentioned what it isn’t. Sendak fuckin lucked out, man. He pulled it off. I’m pretty sure I can hear Dr. Seuss blowing around in his urn now that this has been proven possible. I mean think about that HORTON HEARS A WHO movie, for example. I believe that’s the first Dr. Seuss feature film to look halfway decent, in fact they did a good job of turning his artwork into a three-dimensional world. Otherwise it has nothing at all to do with the poor bastard. They take the 5-10 minutes of story in the book and bury it in a bunch of unrelated wacky sitcom shit. The timid, loyal elephant character is turned into a Jim Carrey goofball that dances around standing upright doing celebrity impressions and cartoon sight gags and shit. No respect at all for the tone or spirit of the original story. That’s how bad Hollywood is at reading, they can’t even do it when there’s pictures.

WHERE THE WILD THINGS ARE doesn’t have a single drop of that bullshit. It expands on the book organically, not trying to shove it into movie and Saturday morning cartoon formulas, but just letting it grow naturally, keeping the same tone, mood and simplicity. Jonze is looking deep into the simple story and interpreting it instead of looking outside for other subplots to pile on top of it.

How is it possible that this movie was made with the voices of James Gandolfini, Chris Cooper and Forest Whitaker instead of Jonah Hill, Seth Rogen and Snoop Dogg? Huh? Can we give Obama credit for this? It seems like a miracle to me. You know what the trailer would’ve been like: Starts out real dramatic, Harry Pottery orchestral score playing as the camera floats through a beautiful CGI ocean, onto an island, into a forest. The sound of giant feet plodding through dirt. The camera comes to the unmistakable shadow of a large, horned monster. Then…

“Wild thing. You make my heart sing. You make everything… groovy.” The computer-animated wild thing leaps weightlessly in the air doing air guitar. Then a wacky record scratch and Tone Loc’s “Wild Thing” comes on. And some sort of dated MATRIX reference maybe. Or American Idol. The wild things make little quips, puffs of smoke come out when they dart around waving their arms everywhere, and there’s jokes about cell phone minutes or 401Ks or something. Ha ha, because why would a wild thing have a 401K. Funny stuff.

The teaser poster: white background. A wild thing standing with his arms folded like a lost member of Run DMC, wearing Snoopy Joe Cool sunglasses. Max next to him, similar pose, backwards baseball cap, skateboard in hand. Below that it says “BORN TO BE WILD.”

You know this to be true. It’s much, much more likely that that would happen than what we got from Spike Jonze. It’s like that speech Dr. Nudity makes on Mars in WATCHMEN. Out of all the possibilites, for this to be the outcome is a miracle.

I know I’m saying more about what’s not in the movie than what is, but that’s the best way I know to describe it. Somehow it’s fantastical and naturalistic at the same time, a fantasy movie that seems to strip away all the artifice, all the bullshit. It throws away all the gimmicks and crutches you expect to see in a movie about this and replaces them with humanity, for good and bad. Through these monsters you have fun, you get scared, hurt, angry, you make friends, you forgive, you say goodbye. It’s funny, but not jokey. It’s weird, but not quirky. It’s gloomy, but not “dark.” It’s narratively simple, but emotionally complex. It’s a movie about big cool looking creatures but it’s more honest about life than movies that are supposed to be the real deal.

Let me cut to the chase: WHERE THE WILD THINGS ARE is a masterpiece. There’s nothing like it and if there’s ever anything like it again it’ll be a long god damn time from now. The movie is like a place that you go, and I can’t wait to go back. But it’s basically an art movie, it has no interest in pleasing everybody. That’s not some elitist thing, it’s just the truth – this is a movie where there are more feelings than there are plot points. Jonze said somewhere his model for the dialogue was John Cassavetes movies, and I don’t think he was talking about THE DIRTY DOZEN. Obviously some people got no time for a challenging kid’s movie, and those people will find this boring as hell.

It’s like you and I know THE LIMEY is fucking badass, but we probly have friends who’d fall asleep during it. And you wouldn’t show it to your mom. Doesn’t mean your mom is stupid, doesn’t mean THE LIMEY isn’t great. WHERE THE WILD THINGS ARE is the same way. Probly won’t make much more money than that thing with the gun toting guinea pigs, but I believe when everyone involved with that movie is dead and buried and not one person has thought of it in nine years many kids and parents will still be passionate about WHERE THE WILD THINGS ARE. That’s the trade off.

I mean, I’m not sure what other kid’s movie to compare it to. I haven’t seen ALVIN AND THE CHIPMUNKS (either the squeakquel or the nutriginal). I have seen GARFIELD though (part 1 only), and in my opinion this is a better movie than GARFIELD. Just my 2 cents.

Spike Jonze
This entry was posted on Monday, October 12th, 2009 at 1:37 am and is filed under AICN, Family, Reviews. You can follow any responses to this entry through the RSS 2.0 feed. You can skip to the end and leave a response. Pinging is currently not allowed.

85 Responses to “Vern’s WHERE THE WILD THINGS ARE review ‘monsterpiece’!!!!”