Holy shit, all the sudden it’s October. And you know what that means, this is when I pretty much switch to an all horror programming lineup. I’m gonna be watching horror movies all month, and most likely failing to find a great ’70s or ’80s slasher movie I never saw before. (Don’t worry non-horror junkies, I still got some residual September viewing I haven’t written up yet, and I’ll do some new releases I’m sure.)

We’ll get into the good shit soon enough, but I remembered I had a review I was gonna send to Ain’t It Cool and hadn’t yet, might as well kick off the celebration with a  not-very-anticipated DTV vampire sequel. I know in some cultures that’s considered bad luck, but to hell with it. I ain’t afraid of no curse. 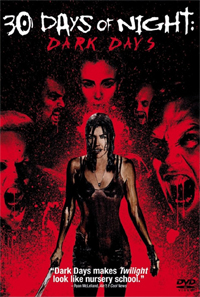 30 DAYS OF NIGHT: DARK DAYS is the DTV sequel to 30 DAYS OF NIGHT: REGULAR. It begins by re-enacting the ending of part 1’s re-enactment of the ending of BLADE 2 where a couple sit and watch the sun rise together as a sort of love-suicide because one of them is a vampire who turns to ash and blows away. But I could’ve sworn the lady in the Blade/survivor role was Melissa George from TURISTAS, turns out she’s Kiele Sanchez from A PERFECT GETAWAY as Stella, a fire marshal of Barrow, Alaska and sole survivor of the 30 day vampire siege.

But now she’s in L.A. following her new career in public speaking. She does little talks trying to spread the word that all those people in Alaska were killed by vampires, not a gas leak like they say on TV. I mean, she was a fire marshal, she can tell the difference between gas and vampires. But the whole thing was covered up, probly as part of some questionable oil deal would be my guess. I bet Governor Palin knew about the whole thing too and didn’t say shit, not even on Twitter. And she couldn’t have been bothered to veer her wolf-hunting helicopter off course to bust a couple shots off at those fucking bloodsuckers. Anyway I’m getting off topic here. The point is it’s a surprisingly cool opening as we find out how she uses speaking engagements to lure vampires and kill them in front of everybody, a one-two-punch of extermination and awareness. Killing two bats with one stake.

After some vampire killing and some police harassment she goes back to her hotel room where she’s ambushed by three unfriendly fellow vampire-survivors: Harold Perrineau, a white guy, and a really obnoxious whiny girl who thinks she’s tough because every once in a while she takes a dainty sip from her little flask. They scare Stella, then take her to meet this guy Dane, a sort of anti-vampire guru who’s been her pen pal for a while. You know how they always say if you meet a hot girl on the internet it’s really an old fat dude? Well, if you have an anti-vampire pen pal he’s gonna turn out to be a vampire. And she should’ve know too, because who the hell still writes letters with a typewriter?

Anyway these guys recruit her, not for a support group but a vampire hunting team. They’ve used Dane’s insider knowledge to track a vampire queen to L.A. and they’re on a suicide mission to take the bitch out. I don’t know if it works like bees or what – don’t they just hatch a new queen if you kill it? I guess they must know what they’re doing.

This queen is played by Mia Kirschner, who I gotta admit is really attractive even with monster fangs and contacts. I can see why they’d follow her. She’s planning another Barrow, Alaska 30 day all-you-can-suck blood buffet, so the movie is about the humans trying to stop the boat from leaving. There’s not another 30 days of night in the sequel. So it should be called NOT ANOTHER 30 DAYS OF NIGHT!. Or also I thought maybe 30 DAYS OF NIGHT: DARK DAZE would be good, if there was some vampire stoner hijinks in there. Adding a “National Lampoon’s” or “American Pie Presents:” on the front could also work.

It’s nicely shot with lots of faces covered in dark shadows with little golden highlights along the edges. It has a pretty cool ending, a cool way of defeating the queen (or DO they?) and an unexpectedly fucked up conclusion. And I respect that it’s not just a lower budget, lower quality rehash of the original like so many DTV sequels (I’m looking at you, three different WILD THINGS sequels) especially since the original didn’t entirely work and nobody needs to see a not-as-good version of that.

On the other hand the first one did have that cool premise and setting. By moving the story to L.A. you make it more like every other vampire movie. It’s like vampire hunters from VAMPIRES going into a dark building like I AM LEGEND, dealing with vampires and their sycophant minions in the police force like the “familiars” in BLADE, so it reminds you of all these movies that have much better stories, characters and slayings. I don’t remember what rules were established in the first one but this time they just kill vampires by shooting them with machine guns. Not alot of tactics and weirdly not alot of bullet holes even when they shoot up a small hotel room.

So it’s not that bad, but you and I both know we’re in an age when really good DTV movies do exist, so “not that bad” isn’t a recommendation anymore. E for effort, I guess.

But if you hear I got killed by a gas leak don’t believe it.

DTV DTV sequels vampires
This entry was posted on Friday, October 1st, 2010 at 3:06 pm and is filed under Horror, Reviews. You can follow any responses to this entry through the RSS 2.0 feed. You can skip to the end and leave a response. Pinging is currently not allowed.