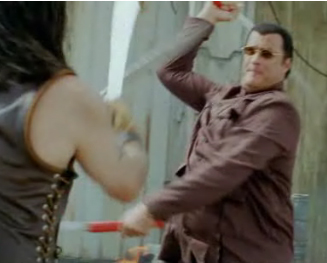 Harry has an interview with Robert Rodriguez about MACHETE and some swordfighting cartoon he’s gonna remake in his greenscreen warehouse. Of course my favorite part is this comment about Seagal in MACHETE:

“Seagal was so awesome we kept expanding his role on the set. The big final battle is Machete vs. Seagal and it’s amazing.”

I was hoping this would be the case. The script I read had Seagal’s character only in two scenes, but they were crucial ones. I’m also happy to hear Rodriguez refer to the character as a “Mexican drug lord.” I knew he’d take advantage of Seagal’s talent for rolling his Rs (see, for example, how he pronounces “Geraldo” in HARD TO KILL).

The interview also makes vague reference to controversy over the trailer’s glorification of illegal immigrants. I don’t know if any media people have really tried to make an issue out of it, but it’s funny if they have because I requested that in my script review over a year ago, saying, “By the way, Machete is portrayed as a mythical protector of illegal immigrants. I hope somebody on Fox News gets riled up about that. This whole thing where we laugh every time they say ‘teabagging’ can’t last forever, they’re gonna need some new material.”

More good Rodriguez news: I forget where, but somewhere I just read an interview that said there was only one greenscreen shot in PREDATORS.

This entry was posted on Thursday, May 20th, 2010 at 1:11 am and is filed under Blog Post (short for weblog), Seagal. You can follow any responses to this entry through the RSS 2.0 feed. You can leave a response, or trackback from your own site.