Today we start with “Outlaw Vern”:

Ladies and gentlemen of the internet, Mr. Hercules T. Strong of the Co-axial TV News and DVD Lists invited me to write a few words about STEVEN SEAGAL LAWMAN SEASON 1, an A&E reality series that comes out on DVD this week. I haven’t been posting here on the Ain’t It Cool News as much as I used to, so it’s good to be back. I’m not sure why he thought of me though, since I’m not a television critic and don’t really know very much about reality shows. But I suppose I do know a little bit about Steven Seagal, mainly just because I’ve seen every movie he’s made several times, saw his band perform live, still have a cupboard stocked with his Lightning Bolt energy drink and spent five years writing a book analyzing his entire filmography. So come to think of it I might have something to offer here. Hercules got lucky on that pick. 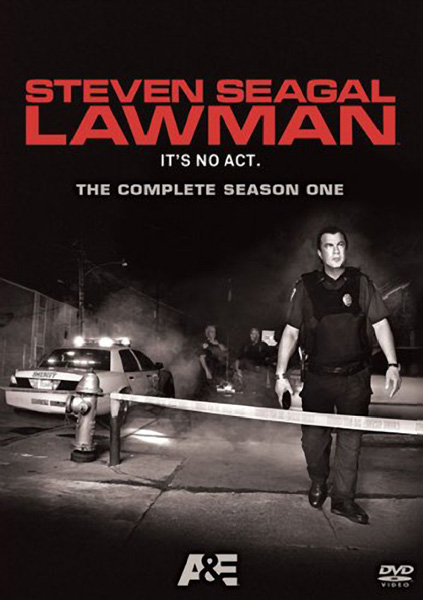 To me Seagal is an interesting figure for many reasons. He has made some awesome movies (OUT FOR JUSTICE, MARKED FOR DEATH, UNDER SIEGE, etc.), some humorously ridiculous ones (OUT FOR A KILL, OUT OF REACH) and best of all, some that are equal parts awesome and ridiculous (ON DEADLY GROUND, BELLY OF THE BEAST). I love how often he works the same motifs and obsessions into his movies, including but not limited to zen Buddhism, animals, blues guitar, New Orleans accents, the corruption of intelligence and police agencies, environmentalism and throwing motherfuckers through windows. I was a little worried about him doing a reality show, because I think he still has it in him to make enjoyable movies (even if the last couple weren’t as good as URBAN JUSTICE and PISTOL WHIPPED) and I don’t want him to become some trying-to-be-in-on-the-joke pop culture figure or denigrate his past work through reality show buffoonery (I won’t name any names but an iconic rapper/hypeman who’s lampin he’s lampin he’s cold cold lampin comes to mind). Fortunately, this show is more in the tradition of serious law enforcement shows like DOG THE BOUNTY HUNTER, but with the added surrealism of a movie star being on the scene the whole time.

I guess I should explain the premise. Seagal has some kind of honorary title from the Sheriff’s Department in Jefferson Parish, Louisiana that stems from him helping train their deputies in aikido weapon retention techniques going back about 20 years. According to the show and the cops who are on it Seagal actually for real goes back a couple weeks at a time, a couple times a year, to help out with training and go on patrol like a normal cop. I think we can all agree that his role is probly exaggerated on the show and that the first person in talkback who thinks he’s blowing our minds by pointing that out is a numbnuts. The second one is okay though but the first and third and thereafter are wasting our time. But it’s fun to watch Seagal on the scene and trying his damndest to help out.

Sometimes it seems a little forced when he tells members of his team (who I call the Seagal Squad) what to do or when he says “Let me take a look at these guys” and it does a visual effect to show that he’s scanning over them for details that only a Seagal would notice (I call it Seagal Sense). But other times it seems like he genuinely knows what he’s doing. They do a good job of finding a theme or gimmick for each episode, and he manages to put his personal stamp on the show just like he does his movies. We see him training attack dogs, worrying about the welfare of animals, playing guitar with his blues band Thunderbox, talking about zen and zen archery, buying Chinese herbal medicine, shooting the heads off of matches, even performing acupuncture on his Colonel. This is also the only footage ever of Steven Seagal in a zoo feeding dead animals to alligators. It also shows a human side to Seagal that you don’t see as much in his movies. He admits to wearing sunglasses at a children’s cancer ward to hide tears, tells a little girl in a karate class that he’s very shy like she is, jokes around with his buddies and gets egged into talking shit about Jean-Claude Van Damme, seems genuinely worried that a police dog might cut his paws on some broken glass.

And of course you also get to see how his fame affects his attempts to be a cop. It’s really funny to see people worrying about getting busted and then suddenly getting excited when they realize who’s busting them. Seagal ends up signing alot of autographs, although they usually say it’s their auntie, their dad or their wife who loves his movies, and not themselves. But the most interesting side of the show might not be intentional – it’s kind of an eye-opening look at the tedium of police work. Most of the time the Seagal Squad seem to be stuck in an endless loop of hassling young black males who “look suspicious” or get scared and run. It’s uncomfortable how often they bother completely innocent people (although sometimes they seem more excited to meet Seagal than pissed to be racially profiled). The Squad rarely find anything more than outstanding traffic warrants. Alot of times they confiscate guns, which they like to “get off the streets,” but there’s an endless supply of those. It’s like trying to kill all the bees in the world. I think Seagal and his Squad try to do a good job, and there are some times when they’re really thoughtful about talking to parents of young people in trouble or letting somebody go on a minor violation that could fuck up their life. I got some opinions about some of the things that go on on the show, and so do other people.

The comments on my episode reviews over on outlawvern.com have turned into some serious discussions and arguments about racial profiling and drug laws. I honestly think it’s a thought provoking show. The beauty of LAWMAN is that it’s not just another celebrity showing off his family and fancy house. It does for me a bunch of the same things that his movies do: it blurs the line between fiction and reality, movie star and real life warrior; it smuggles some political and spiritual ideas in where you don’t expect them; it balances the badass and the absurd, allowing you to enjoy Seagal’s adventures while also laughing at some crazy shit.

The DVD lists one bonus feature: additional footage. I haven’t seen it so I don’t know how much. It would be cool if it was a new HARD TO KILL style cliffhanger where his partners try to plant drugs on him and frame him so he has to come back to prove his innocence and get revenge in season 2. But I don’t think that’s gonna happen. There will be a season 2, though. They shot it during Mardi Gras, so I’m hoping they’ll harass more white people this time around.

Seagalogy Steven Seagal
This entry was posted on Thursday, April 1st, 2010 at 10:32 am and is filed under AICN, Reviews. You can follow any responses to this entry through the RSS 2.0 feed. You can skip to the end and leave a response. Pinging is currently not allowed.