BROOKLYN’S FINEST is a good not great cops and crooks movie from the director of REPLACEMENT KILLERS, Antoine Fuqua. I think it’s better than I’d heard, and I’ll tell you why, but obviously the most significant thing about it is that it has returned one of America’s greatest resources, Wesley Snipes, to his rightful home on the big screen. You guys know I love DTV, but Wesley is too powerful for DTV. He’s not as good in those. I would’ve felt like an asshole if I missed a chance to see him projected again, so I went and saw it. And by the way, I’m the only person in Seattle who did that yesterday. It’s down to one show at one theater and I was the one guy who showed up that day. 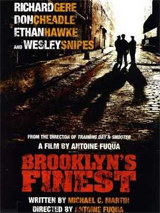 Snipes is only it a little bit. Mostly it intercuts between the stories of three characters: Richard Gere as a cop about to retire, Ethan Hawke as one who’s planning to steal drug money, and Cheadle as a drug dealer (actually SPOILER an undercover cop), working with the fresh out of the joint Snipes.

Gere’s character is the least typical. His troubles aren’t real showy, he’s mostly depressed. He wakes up in the morning and plays a game of Russian roulette. Some people have a morning ritual like they make coffee, read the newspaper or even go for a jog or something. This guy has the same thing except it’s that he almost shoots himself.

Despite his depression and self-loathing he seems like a decent if unremarkable cop. Well, despite his depression and also despite his regular visits to a prostitute (Shannon Kane from BLOOD AND BONE, playing the gorgeous kind you only see in movies). He really likes her and is open with her, for example he tells her about his department troubles while she’s blowing him. But I mean as far as the actual police work he’s not corrupt, he doesn’t like that shit. For his last week on the job he gets a trainee, and he actually tries to do a good job. It’s not like TRAINING DAY (also from Fuqua).

Meanwhile, TRAINING DAY’s Ethan Hawke might as well be quoting that “King Kong ain’t shit on me” line that Denzel had. He seems all coked out and panicked all the time, but it’s because he’s getting desperate. His wife is having twins and his house is small and full of toxic mold and he has this plan to steal some drug money and use it to buy a new house. But every time the opportunity presents itself shit goes wrong.

And then you got Cheadle in this situation where the FBI wants him to set up Wesley for a drug bust but he grew up with him and had his life saved by him and knows he’s trying to get out of the life so he doesn’t want to do it.

Yeah, people have pointed out that this material has been covered before. But there’s some interesting takes on it here. It works more as a series of really good scenes than a solid story. The opening scene for example is just a really well acted conversation scene, it sets up the theme of the movie but it reminds me of THE FRIENDS OF EDDIE COYLE in the way it just seems like some small timers talking about shit. Another one I like is the poker game with Hawke and his cop friends debating the ethics of stealing drug money, then turning into a big fight over racist comments.

The Brooklyn of this movie is dirty and poor. Everything is small – Ethan Hawke’s house, the police briefing room, the locker room, the apartments where the drugs are made. It’s got a realistic feel to it, they used the locations well. It makes his New York dirty cop movie seem completely different from his L.A. one.

The whole cast is real good, and of course it’s especially good to see Snipes getting to put his skills into a role a little better than ART OF WAR II. The only person I thought didn’t quite pull off her character was Ellen Barkin as tough talking FBI lady, but it’s mostly because they gave her a ridiculous line where she calls black people monkeys to try to show off. That was a little Troy Duffy for my tastes.

(lots of spoilers coming up)

The Gere story was the least interesting to me, but it ended up in the most interesting place. At first I thought he was miscast. It was hard to accept this handsome dude as a depressed old cop. The uniform couldn’t hide that it was American Gigolo under there.

But around the time he was asking his favorite prostitute to move to Connecticut with him I thought “a ha” and realized the genius of it. This is the anti PRETTY WOMAN. In PRETTY WOMAN it’s the prostitute who feels she’s not good enough for him, she’s a lower form of life. In this one the prostitute rejects him. He tries to be romantic with her even though he just saw her with her last client and now she’s calling him by the same pet name and sweet talking him while she wipes down her crotch.

He goes out to his car and is about to swallow a bullet, but happens to see a van pick up a teenage prostitute who he recognizes as a missing girl. So he follows the van to a horrifying dungeon-like basement apartment where three girls are handcuffed to a radiator. We’ve been told he had an undistinguished record as a cop, now he’s freshly retired and he’s gonna voluntarily enter the belly of the beast.

He tries to be heroic, but it’s not pleasant. He has to pick up and carry a drugged out teen in lingerie mumbling “I’ll suck yer dick, I’ll suck yer dick.” Next thing you know he’s got an angry pimp with a bullet in his chest strangling him and banging his head against a metal shelf, and he has to choke the guy with plastic wrist restraints to get away. Man, I love it, Richard Gere seeing a little less glamourous side of the prostitution industry.

I think what holds the movie back from greatness is just the structure of the thing. I liked all three stories but having to skip back and forth between them kind of kept me from getting too involved. It feels off-balance when it’s cutting between three tense moments but one is a major drug deal and another is trying to stop a fight between a store owner and a kid that might’ve stolen a candy bar. They do kind of a CRASH thing of showing the unrelated characters walk past each other and make eye contact every once in a while, but it still feels really disjointed.

In fact, the three stories end up on the same block for the climax, and that actually made it a little confusing because I wasn’t sure if they were supposed to be on different floors of the same building or what. Some of the characters do intersect, but they have no idea who each other are.

In the end it’s a big mess, a huge crime scene, cop cars everywhere. There’s a dead drug dealer and dead cop in the middle of the street, another cop shot the one cop by accident, in the building there’s an apartment with a different dead cop and several dead drug dealers, hundred dollar bills everywhere, on another floor some dead human traffickers and escaped teen prostitutes. (By the way, this movie is extremely violent.) And the one main character who survives just walks away. But behind him I imagine there’s a detective asking, “What do these all have to do with each other? Are they connected?” And another cop says, “Only thematically.”

Antoine Fuqua dirty cops Don Cheadle Ethan Hawke Richard Gere Wesley Snipes
This entry was posted on Thursday, April 1st, 2010 at 3:34 pm and is filed under Crime, Reviews. You can follow any responses to this entry through the RSS 2.0 feed. You can skip to the end and leave a response. Pinging is currently not allowed.