I know Elvis never meant shit to Chuck D, but I kind of like him. I’m not a huge fan or follower, never been to Graceland (yet), but he’s kind of interesting to me. I’m mostly fascinated by his earlier music and his later persona. And I’m especially interested in the fact that he did karate. Maybe if this portion of his life had been made more public it wouldn’t seem that cool, but as it is it’s kind of a mystery. Here’s this iconic part of pop culture, now more of a character than a human being, and you associate him with certain things, but kicking ass is not usually one of them. The juxtaposition of The King and karate is kind of hilarious and awesome to me. 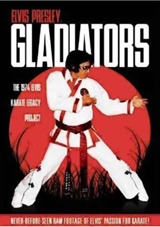 Well, here’s a DVD that promises to mine that uncharted territory for new gems. The packaging and press releases explain, “For nearly two decades, Elvis Presley practiced the art of karate with skill and enormous dedication. The discipline brought a thrilling new physicality to his film and stage performances, but fans have never before had the chance to see the King in authentic action. [This DVD] provides exactly that opportunity, bringing together footage from Elvis’ never-completed martial arts epic The New Gladiators along with insightful commentary by fellow-enthusiast Wayne Carman who was with Elvis when much of the footage was shot.”

Wait a minute, what? Elvis was working on a karate movie called THE NEW GLADIATORS? Why didn’t they finish it with doubles, GAME OF DEATH style? We gotta see this! We gotta know more! Unfortunately, this DVD is itself never-completed. It doesn’t explain jack shit. It seems like a bunch of DVD extras with no feature.

From what I can gather, THE NEW GLADIATORS was not a “martial arts epic,” it was a documentary about karate. When you click “PLAY VIDEO” on this DVD what it does is play the rough footage they shot for the documentary, which is less than an hour of multiple angle footage of Elvis, Red West and a couple karate champions doing a demonstration at the Tennessee Karate Institute in 1974. The sound is too garbled to make out, so the aforementioned “Wayne Carman who was with Elvis when much of the footage was shot” gives his commentary sort of explaining some of what’s going on.

Carman helpfully explains important details like that they bow to each other alot in martial arts, but not any context of what this documentary was supposed to be or why it wasn’t finished. For the most part the DVD is approached as if you know what’s going on and it doesn’t want to insult you by explaining it. So any information you glean is by accident.

Carman mentions that Elvis studied Kenpo, Taikwando and “a Japanese style in the military.” He also says,”Elvis wanted to promote the TCB system, the face, spirit and discipline of it, as a way of taking care of business and doing it in an honorable, fashionable way.” I didn’t know that Elvis had his own style of karate called TCB, but I pretended I already knew so that Wayne wouldn’t look down on me.

I wish they had either tried to complete the documentary as well as possible, or (maybe better) incorporate this footage and other things into an overview of Elvis’s interest and history in martial arts. How did he start? How serious was he? What do other people who were there have to say about it? What other footage of photos are available? Can we see a hilarious montage of these stage moves you say were influenced by karate? etc.

What they have instead doesn’t come anywhere close to a real movie experience, but it is kind of cool to see. Elvis is sweaty and tired looking, but it seems like he’s actually pretty good. Like Seagal in LAWMAN, he demonstrates how to disarm a guy who’s coming at you with a gun. He also mimes a neck snapping move at one point, and tiger style eye raking.

The best thing about it is Elvis’ karate uniform. He has a robe (Gi?) with “EP” stitched on the back in pseudo-Asian font. Under that he wears his trademark embroidered bellbottoms and even has a collar sticking out. Alot of the time he’s wearing boots and sunglasses. And you can see his jewelry hanging out at times. A couple times Carman says that people would ask why he wore sunglasses or boots in the dojo, and Carman would say, “Because he’s Elvis.”

The extras – which really shouldn’t be called extras in this case because there’s not enough to fulfill the regular duty of a DVD let alone have extras leftover – include an audio interview with Carman where he comes a little closer to explaining what the documentary project was about and why it fell apart. Sort of.

One highlight is his story about the gladiators choosing animal names. The master decided Elvis should be Black Panther, which Elvis thought was awesome and Carman thought was perfect because “he looked like a panther, just pretty and black.”

But after he got home Elvis started thinking about black militants, and called the master on the phone. “I don’t wanna be disrespectful, but would it be okay if I changed my animal name?” And he became Mister Tiger.

Actually the coolest feature on the DVD for me was “1968 Comeback Special Karate Cut,” which is several takes of a karate scene that I guess was in the special. If I was familiar with this scene already it wouldn’t have been impressive, but I wasn’t. Elvis is on a set, lip synching “It Hurts Me” to a woman, when suddenly a bunch of dudes (some of them the same guys we saw in the dojo) start attacking him, and he fends them off with karate, even picking up one guy and airplane spinning him, and doing a move where he jumps onto a guy, falls onto his back, somersaults and kicks the guy in the air. Since we see multiple takes we also see that he does the entire routine all at once, knowing all the moves real well.

This would make amazing Youtube footage, but not a good DVD. Still, I’m glad there is this record of Elvis’s TCB style of karate. After A CHRISTMAS CAROL we were discussing that idea of how some day they might digitally create movies with dead celebrities and all that shit. Well, here’s what that technology was made for. Somebody needs to make a movie in the style of the Elvis musicals as they would’ve looked if they were made for the martial arts movie fans of the mid ’70s. And Elvis’s fighting style could be based on the moves we see here. That’s a movie that should exist, and somebody should spend hundreds of millions of dollars correcting the fact that it doesn’t.

Elvis
This entry was posted on Monday, January 11th, 2010 at 2:00 pm and is filed under Documentary, Martial Arts, Reviews. You can follow any responses to this entry through the RSS 2.0 feed. You can skip to the end and leave a response. Pinging is currently not allowed.