I couldn’t tell you what made me decide to rent this one. I’m not a Schwarzenegger fan, I don’t like looking at gigantic veiny muscles, and I’m not really interested in finding out why some people are. And yet, for some reason, I bring this one home and watch it. And it’s pretty fuckin good.

First off I gotta warn you, there is some horrible fuckin music in this movie. It starts right at the opening and it’s hard not to turn it off. Once you get past it, you basically see a story about a bunch of blond oafs lifting giant metal things, grunting, sweating, making ridiculous faces, not knowing what else to do with their lives. A young Arnold Schwarzenegger turns out to be the star of this professional bodybuilding world, sort of the Michael Jordan who everybody talks about, hopes to meet, doesn’t think they can ever beat. They interview him and he talks about how he is really an artist, making a sculpture, only instead of clay he’s using his body. You know, like Michael Jackson or that french gal in the upcoming cronenberg picture. Or that guy that pounds nails through his dick. 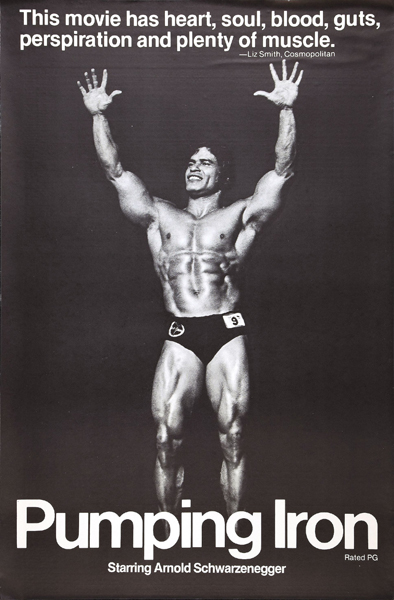 The movie gets interesting when it moves to the big competition in south africa. Schwarzenegger is expected to win. But there is a young underdog, a Rocky figure, who the movie also focuses on, named Lou Ferrigno. Remember, the guy who they painted green for the incredible hulk show. NOT Eric “Chopper” Bana, but the muscleman on the tv show. Lou Ferigno.

Well these two are some interesting characters, and unless you’re some kind of complete asswipe, you’re gonna side with Lou. He doesn’t seem very bright at all, but he has one of them quiet intensities. He barely talks, and you watch his eyes and try to discern what he’s thinking while his dad, a cop who retired from the force to become his manager, blabbers on. You know, it’s a sweet gesture to retire from your job to help out your son, but when you see how the dad treats him it is clear that he really is trying to live his life through his son’s gigantic muscles. At one point Lou goes out there and flexes his muscles and what not, and blows the judges away. He comes into the back and his dad tells him he did great, then immediately says why didn’t you do such and such, and complains that even though he impressed them he didn’t do it right.

Plus, Arnold (or Ah-nuld, as people call him now – get it, because of the accent. it’s witty) is a grade-a asshole. In his interviews, he explains that he is the best, and even if Lou shows up and is 2% better than him, he will have a day before the competition to hang out with Lou, so he will be able to psychologically convince him to lose. He brags that he likes to give bad “advices” to young competitors who look up to him, so that he can beat them.

I think the most telling moment is when you see Arnold laughing and joking at an outdoor breakfast table in the sun, in South Africa, during apartheid, with five black waiters standing attentively several feet behind him.

If this wasn’t a documentary, Lou would definitely win. But it’s not so, you know, you might be disappointed. Who knows, I don’t know.

Have you ever watched the world’s toughest man competition on one of them sports channels? There are all these huge musclemen from all over the world, not bumpy and sculpted like in Pumping Iron, but more just huge rhinocerous-like dudes. And they do all these weird competitions like who can carry a slot machine the farthest or bend the most pennies in half, or a race where you have to carry a small car on your shoulders. Sometimes I watch it and I like it because those big dudes are really sweethearts. They interview the loser and he says he is so happy for the winner and glad he gets to go home to his family now and not have to worry about picking up a big rock attached to a pole and spinning it around in circles. One time I watched it and these two guys were arm wrestling, and one guy just broke the other guy’s arm. And he was mortified! “Oh my god, I am soooooo sorry!”

I never say this, but it was adorable. I mean, you woulda thought so too.

Anyway that’s almost what you get with Lou here, except he doesn’t show it. You just see it in there, the torment that he has to go through, and all he wants to do is impress his dad by having arms way bigger than any normal person would ever need or want to have. It’s a real good vs. evil situation and not to give anything away but it’s too bad the bad guy went on to become a millionaire and international movie star and the good guy is probaly appearing at car shows.

Yeah I know he’s doing Terminator 3, but that’s an act of desperation. I predict straight to video within three years.

Arnold Schwarzenegger George Butler Lou Ferrigno
This entry was posted on Tuesday, January 1st, 2002 at 12:09 pm and is filed under Documentary, Reviews, Sport. You can follow any responses to this entry through the RSS 2.0 feed. You can skip to the end and leave a response. Pinging is currently not allowed.