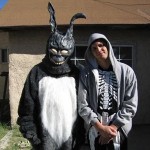 Vern here. I have been known to review a DTV sequel or two, so somebody requested I report on the quality of S. DARKO: A DONNIE DARKO TALE, available on the DVD as of today. So don’t ever say I didn’t give back to the community.

It’s been a while, but if I remember my DONNIE DARKO right, a bunch of weird shit was going down with a bunny man and hallucinations and mysteries and what not, so there was time travel and apocalyptical type shit, turned out the bunny was a dude in a Halloween costume that got hit by a car, Donnie was killed by a plane engine landing on his house, trippiness, etc.

End of story, right? Wrong! Not unless you ignore the crucial events that occurred in July 1995 in Utah to Donnie’s younger sister Samantha, better known in titles as S.

IMDb informs us that S. was played in the original by D. Chase, who was also the scary little girl in the American version of THE RING and the voice of Disney’s Lilo. Chase returns in S. DARKO as a pretty 19 year old. She and her sassy best friend are on a rebellious road trip of sisterhood when their car breaks down in the middle of nowhere. They get help from a local bad boy who keeps his smokes rolled into his sleeve even though his t-shirt has a pocket in the front. That’s how you know this guy could fix a car. It’s gonna take a few days though so they check into a hotel run by indie stalwart J. Hawkes.

What the fuck is a stalwart anyway, not sure how I ended up using the word stalwart. I would like to give a shoutout to all you stalwarts reading this.

Like in her brother D. Darko’s tale, S. Darko’s involves a countdown to doom and some weird shit and/or quirky characters. There’s a nerd who’s turning monstrous from touching a strange meteorite, a crazed Desert Storm veteran who the locals all fear, a possibly pervy youth minister who passes out a book called “Jesusonomy” and still hangs out at his church after it gets burned down, and a mystery of some missing kids. Also E. Berkley from SHOWGIRLS is in there but I didn’t realize it was her.

There’s some weird dream imagery including a phallic CGI ABYSS tentacle (those were in the first one, right? Can’t remember for sure) and a glowing feather she pulls out of the TV during an infomercial for the G. Foreman grill. Not sure what the fuck that means, but I’ll go ahead and count it as a nice touch.

It’s funny, usually you gotta assume it’s a bad idea to make a sequel without the input of whoever made the original. But I think R. Kelly is a special case. D. DARKO was a movie that seemed refreshing and original at the time, or to some youths seemed like the greatest movie ever made, projected directly from God’s beaming eyes onto the side of a magical cloud. Anyway it was pretty good at the time so it was fair to expect interesting things from this director. Instead he wrote god damn DOMINO and set a new world record for self indulgent messes with SOUTHLAND TALES. So I’m sure they high fived and broke out the champagne when he said he didn’t want to do a sequel.

The director they got is C. Fisher, who did some TV episodes, a couple serial killer movies and the C. Gooding Jr. movie DIRTY. The writer is N. Atkins, best known as assistant sound editor on T. Hooper’s THE TOOLBOX MURDERS. They must’ve done thorough background checks and everything because they found two guys completely innocent of working on DOMINO or SOUTHLAND TALES. I gotta respect them for that, but unfortunately they can’t overcome the fact that there’s no reason to make this sequel. The only way to make it seem like a sequel to DARKO is to imitate the original, but the only reason anybody liked the original is because they hadn’t really seen anything exactly like that before. So a sequel is self-defeating.

That said, these guys make a better attempt than you’d think they would. For the most part it doesn’t feel like a cut rate DARKO, the production value is pretty good. The cast is good, the cinematography is good, they capture the gloomy mood pretty good. Lots of slo-mo and musical montages. There’s a guy who builds a metal version of the bunny mask, one that actually hurts his head when he puts it on. The explanation for why he’d make a mask like that sort of makes sense, but it still feels like your typical sequel stretching to bring back familiar elements from part 1. There’s some ambiguousness here but I think also some sloppy storytelling that made me understand what was going on even less than I was supposed to. There’s also not as much humor as in part 1, and 100% less P. Swayze.

I did think a couple things were clever though, so I might as well spoil them.

1). Many movies have a lead who’s having some mysterious character appear to them in dreams or hallucinations to pass on some kind of cryptic message. In this movie it’s the other way around, the lead (S. Darko) keeps appearing in the visions of the mysterious character (the aforementioned vet, Iraq Jack).

2). In kind of a PSYCHO type surprise, S. Darko gets killed in a sudden car accident, and the movie becomes about her friend. But her friend feels bad about mean things she said to S. right before her death so she figures out a trippy way to travel back in time and sacrifice herself in place of S. So then S. is alive and it becomes about her again. Janet Leigh never got to do a double switcheroo like that.

Still, I would not really recommend this movie, it’s an unnecessary rehash. But if you insist on watching it for some reason it’s really not that bad. It’s definitely not one of the all time classic DTV sequels like UNDISPUTED II or FROM DUSK TILL DAWN 2, but it’s way better than an embarrassment like a CANDYMAN 3 and a step above a mediocrity like HOLLOW MAN 2 I’d say.

Maybe it’s a masterpiece if you read the prequel comics though.

If they decide to do part 3 I hope they get further away from the type of story told in part 1. Maybe it could be called DARKO 3: DARKSQUAD. S. Darko is still travelling the country, now on a souped-up jet-engine motorcycle and with a helmet shaped like a sleeker version of the bunny mask. She’s found out that the time travel secrets have fallen into the wrong hands so she leads a team of Timecops fighting Timecrimes. There are a bunch of matrixy fights where they swing their ABYSS tentacles at each other and slap them together like big floppy swords. Then it flashes a bunch of weird images and formulas and it’s all trippy and etc.

Just one possible approach. Anyway thanks Ain’t It Cool,

DTV DTV sequels
This entry was posted on Tuesday, May 12th, 2009 at 10:40 am and is filed under Reviews, Science Fiction and Space Shit. You can follow any responses to this entry through the RSS 2.0 feed. You can leave a response, or trackback from your own site.